Havana is the city where I was born and where I lived and grew up until I left Cuba. It was a home, a place, and a world – all three—holding me as an all-too-willing captive of its embrace. La Habana was held fast by an ocean that surrounded the island with a constant ebb and flow that kept one in the arms of the Motherland. 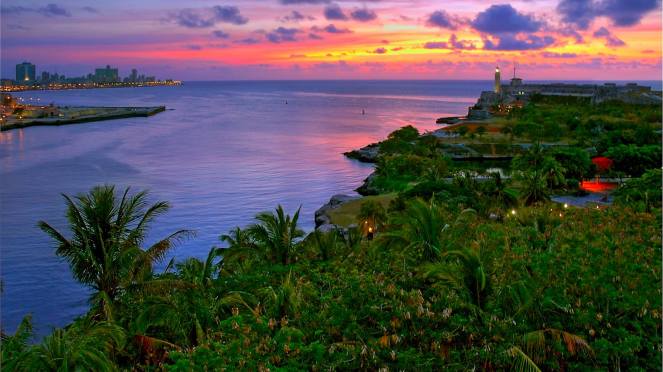 But an even stronger force was the call of the unknown beckoning from just beyond the horizon, summoning in me the wanderlust that eventually defined my story in the world beyond the waters of the Caribbean. For me, that vast body of water was not so much of a barrier separating me from the unknown as it was a waterway that led to a different place, a liquid landscape on which I dreamed I could actually walk all the way to that land beyond the sea, ninety miles to the North.

My hometown felt vibrant and clean, filled with sun and the welcoming smells of Cuban cooking being prepared in kitchens, wafting from the open windows, along with music being played on radios and record players, and the laughter and voices of the rapid-fire speech of variety show announcers, being broadcast on newly purchased TV’s.

Adults moved purposefully to and from their jobs, the fragrance of jasmine and gardenias that bloomed near peoples’ front doors filled my lungs. School children on foot, or on the their bicycles, rushed to and from school, and elegantly dressed old matrons, on their way to or from daily Mass, drenched in Bal a Versailles or Joy left a scented trail that lingered long after they had walked by.

As a child I heard conversations that described Cuba as the most sinful, most troubled, and most politically corrupt of countries in Latin America. But in my youthful eyes, I saw Havana not as most sinful, troubled and corrupt  but  as the most exciting, most inviting, most vibrant, and most beautiful of all cities in the world.

A ride on a streetcar down to the Malecón, the long seawall promenade that links Havana from the Bay in the East, to the mouth of the Almendares River in the West that divides Havana from upscale Miramar, followed by a leisurely stroll along Havana’s dramatic shore line, was always a perfect outing. Even on the hottest summer days the smell of salt and sea air forever in one’s nostrils and the ocean breeze always managed to bring relief.

Again and again, there was that climactic walk, experiencing the one-of-a-kind moment: realizing we were right at the edge of the ocean. To me it felt like the edge of the world. The sounds of seagulls, and the waves splashing against the sea wall, reminded me that we were islanders, surrounded and equalized by the sea all around us, with a magical world lying just beyond where the eye could see.

Long after I returned home from those perfect afternoons, my mind would continue to imagine what might lie just beyond the horizon: a land I wanted to know. Growing up, encircled by that deep blue water, filled me from early childhood with a profound love of the ocean, and a pervading longing for what lay beyond it. That feeling became a constant, embedding in me a life-long wanderlust.

An excerpt from my memoir HOME LOST: HOME FOUND which I hope to publish sometime soon.

2 thoughts on “HAVANA IN MY MEMORY”

This site uses Akismet to reduce spam. Learn how your comment data is processed.