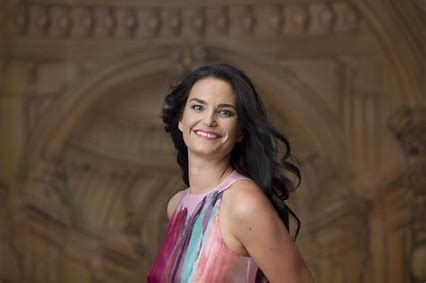 In Handel’s opera of the same title Almira, Queen of Castille loves Fernando, her secretary. Consalvo, her guardian wants her to marry his son, Osman, who is secretly in love with Edilia, who has awakened Almira’s jealousy by flirting with Fernando. Princess Bellante is in love with Osman, whose father is in love with her. Osman loves Edilia but loves the idea of becoming a king even more, so that he feigns love for Almira, and so he asks Fernando to intercede with the queen on his behalf, but meanwhile Raymondo is trying to woo her love, but she is not at all interested, as she loves Fernado, to whom she is about to confess her love when Osman tries to stab him, but Almira disarms him.

(Stay with me, there’s more)

Meanwhile Edilia is jealous of Almira because her lover only has eyes for the Queen and the throne. Tabarco, Fernando’s servant gets hold of some compromising letters and decides to read them out loud to all of the participants in the various love triangles. Later at a costume party in which Raymondo, Fernando and Consalvo dress up as Europe, Asia, and Africa, Raymondo tries to court Edilia, who still loves Osman. Princess Bellante won’t have anything to do with Consalvo. Through the discovery of a jewel and a letter that reveals to Consalvo that Fernando is his long lost son, Almira and Osman and Edilia and Raymondo are finally united, leaving Fernando, Bellante, Consalvo and Tabarco out of any nuptials, at least for the moment.

If you are still with me I will hasten to tell you that in the midst of its numbing succession of aria-recitative pairings and its implausible plot Almira holds some delights, among them a string of duets Handel labeled arie a due, and a pair of ensembles that foretell things to come in the world of Baroque Opera. Much to savor too are the several solo passages – a mix of arias, ariosos and recitative soliloquies – assigned to the comic Tabarco, here played for all its worth by the superb character tenor Jan Kobow. The Masque that opens the final act is a fabulously over the top moment with Handel parodying his colleagues Lully and Rameau and loving every minute.

Hungarian soprano Emőke Baráth, a superb Baroque specialist gets many of the score’s gems, some of which she sings in Italian, not in the rat-tat-tat German of Handel’s librettist. Among many an oasis of Bel Canto, the aria Chi piu mi piace Io voglio and later Geloso tormento are both samplers of seamless legato singing whereas Ingrato, spietato provides Baráth a showy aria di bravura with which to end Act I. Soprano Amanda Forsythe is excellent in the seconda donna role of Edilia, displaying dazzling bravura in Proverai di che fiere saette. The cast is strong overall, but this opera – Handel’s first stage foray written when he was nineteen – clearly favors the females.

The Boston Early Music Orchestra led by Paul O’Dette works wonders with this imperfect and arguably much too long score yet never letting things sag. The four CD album is neatly packaged and the recording is impeccably engineered.