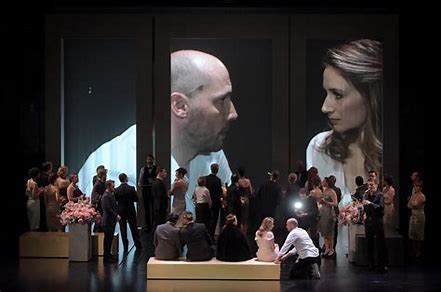 If one settles down to watch Ambroise Thomas’ lite version of the familiar story about the brooding melancholy Dane expecting a faithful adherence to the Shakespeare original the viewer is in for a major disappointment. I was.

Expect instead a light-weright take on the original, dressed in this erratic production in come as you are contemporary garb, a show plagued with many fussy directorial touches that bring no fresh insights into the telling of the story.

Some of the “big moments”, like the first appearance of the ghost of Hamlet’s father come off more chilly than chilling. The entrance of the tuxedo-clad members of the superb choral ensemble Les élements down the aisles of the theatre looks silly and robs the scene of its inherent power. And like that, many more moments… Hanky-panky in Ophélie’s bedroom between the Prince and the presumably virginal young woman interrupted by brother Laertes…

The characters in the original, as sketchily sketched by Barbier and Carré fare from fair to middling, much of the their dramatic effectiveness squarely depending on the acting chops of the members of this largely French cast, at the top of which stands baritone Stéphane Degout, an intense singing actor and a valuable artist with the sort of voice they name Baryton Martin in his country and which we plainly call lyric baritone, meaning a male singer with a ringing, easy top voice that allows the artist to handle the high tessitura of the role with elegant ease.

On the debit side, this viewer found that the costuming given Degout does neither him, nor Claudius, nor the Ghost, nor Gertrude any favors. Video is implacable in the way it reveals budgetary shortcuts in fabrics and tailoring.

Coloratura soprano Sabine Devielhe is one of the finest interpreters of the role of Ophélie I have ever encountered. Pretty as a picture, formidable top notes, technically flawless, stunning Mad Scene. Is the MET listening?

Others in the cast vary. I found Sylvie Brunet- Grupposo a vocally effective Gertrude, but Laurent Alvaro as Claudius and Jerome Vernier as the Ghost both sonorously undernourished. Tenor Julien Behr cuts a handsome figure and sounds good as Laertes. Through no fault of theirs but Thomas’ doing the Marcellus, Horatio, and Polonius are relegated to second-tier walk-ons.

The Orchestre des Champs-Élysées, led by Louis Langrée plays beautifully and idiomatically. Now, Naxos, if we could just get that libretto included…