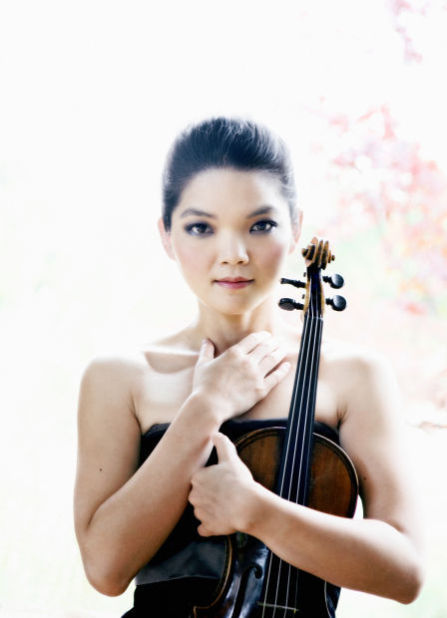 The SOMM compact disc The deeper the blue… takes both its title and its aesthetic from a Kandinsky essay in which the painter speaks of the mystical properties of color in nature and in music.

In the playing of the superb violinist Janet Sung and her collaborators: the accomplished pianist Simon Callaghan, and the rank and file of the note-perfect Britten Sinfonia with the wonderful Dutch conductor Jac van Steen at the helm, we hear a strong commitment to honor the spirit of the multifaceted selections in this intriguing CD.

There’s the 1925 neoclassical and elegant Concerto for Violin and String Orchestra of Ralph Vaughn Williams, a work for solo piano by Henri Dutilleux: the enchanting set of six pieces given the omnibus title Au gré des ondes, here brilliantly orchestrated by Kenneth Hesketh and originally conceived with no further pretentions than to provide connecting music for a group of episodes for 1946 French radio broadcasts.

A compelling 2015 composition by British composer Kenneth Hesketh provides a welcome dose of atonal brawn in this largely tonal assemblage of 20th and 21st century works.

The album also includes two tour de force works: Ravel’s Tzigane, a ten-minute musical obstacle course for only the bravest of violinists, which Janet Sung dispatches without breaking a sweat.

At the end of the CD, Ms. Sung returns in the company of the multi-talented pianist Simon Callaghan to give a fun-filled, jazzy, classy, bluesy an ultimately technically dazzling performance of a notoriously challenging Ravel work: the Sonata for Violin and Piano.

The SOMMCD275 is flawlessly engineered by Ben Conellan, properly produced by Siva Oke, given insightful line notes by Michael Quinn and available as a new release from SOMM.