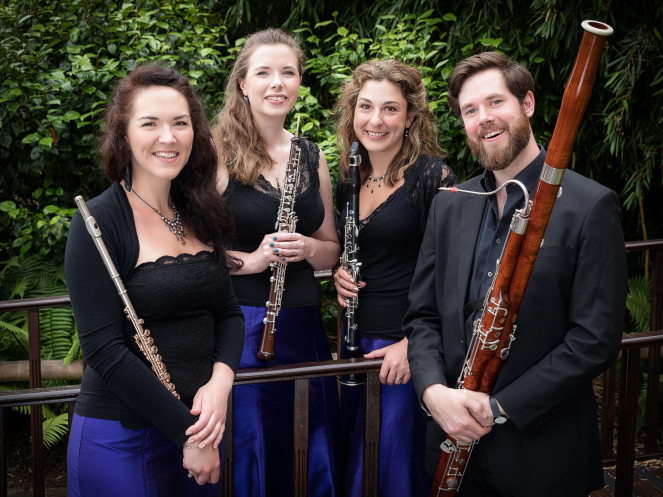 The mere idea of attaching labels to the music of certain composers is a 20th century malaise. But in order to read up on Eugène Bozza, Frank Bridge, Jean Françaix, Richard Rodney-Bennett, Jacques Ibert, and Claude Arrieu, I had to do a Google search and endure a barrage of pseudo-musicological claptrap which led me nowhere.

I then closed up the search and settled down to listen to the absolutely charming métier release FOUR ( msv28587) with the superb London Myriad, a wind ensemble featuring here Julie Groves on flute, oboist Fiona Joyce Myall, the clarinetist Nadia Wilson, and Ashley Myall on bassoon.

The four in FOUR are formidable musicians, impeccable technicians, young of age but mature as players of music that is now lyrical, now outrageously humorous, and in the case of each of both the British and the Gallic composers in this lot, blessedly unpretentious.

The métier CD introduced this listener to Eugène Bozza and Claude Arrieu. Both are new discoveries, both utterly delightful, both resolutely defiant of any labeling, both writing in an idiom that responded to the strict teaching of the Conservatoire by mocking it. Jacques Ibert also was a bit of a rebel and his Deux Mouvements evidence creative flair and solid compositional know-how.

It was very nice to revisit the rarely played music of the English Edwardian iconoclast (sorry about those two labels!) who was accepted by what he first wrote and ignored about what he wrote much later in his long career. Here his four Divertimenti are sheer delight.

The other Brit Richard Rodney Bennett (talk about a crossover artist!) has always been a favorite of ours whether as a jazzman or a cabaret artist or in white tie and tails.

As with so very many releases by métier both engineering and packaging are of the first order.

3 thoughts on “NO LABELS BEST 2019 London Myriad, a wind ensemble”