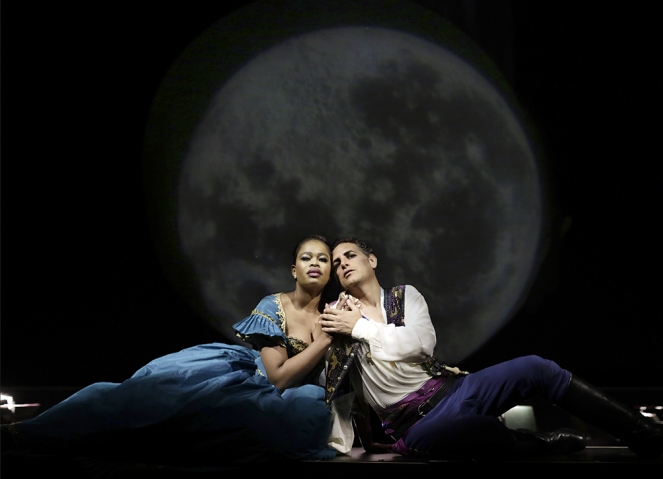 During his rather short career Rossini wrote over three dozen-plus operas, many of which have fallen into unjust neglect, among them RICCIARDO E ZORAIDE.

Now in a new release of this Rossinian rarity by Cmajor, the double DVD features a terrific cast led by Peruvian tenor Juan Diego Florez and South African soprano Pretty Yende in the title roles.

Originally sung by the legendary Andrea Nozzari in the quasi villainous role of Agorante, and Isabella Colbran as Zoraide, and with both leading a cast of Rossini regulars that included the contralto Benedetta Pisaroni and the tenor Giovanni Davide (respectively the first Malcolm and the first King James in La donna del Lago), the 1818 opera calls for a cast of prime voices capable of dispatching daredevil fioriture and easily encompass wide ranges in all the vocal categories.

The 2018 live Pesaro Festival recording measures up to the highest of standards, boasting a superb line up of Rossini specialists. In the important roles surrounding the two leads, tenor Sergey Romanovsky (Agorante) and mezzo-soprano Victoria Yarovaya (Zomira) are both spectacular: Romanovsky a full-voiced lyric-spinto with impeccable agility and killer high notes, and Yarovaya, a stunning Rossini mezzo with a three octave range and suppleness to spare. Kudos also go to the fast-rising Basque leggiero tenor Xabier Anduaga in the role of Ernesto, and the impressive bass-baritone Nicola Ulivieri as Ircano

Rossini was not lucky in his choice of librettists, and this one by Francesco Berio di Salsa is vintage early Romantic operatic nonsense. In spite of the libretto’s inexplicabilities stage director Marshall Pynkoski creates a plausible dramatic reality mercifully sparing the viewer any conceptual indulgences. Jointly aided by set designer Gerard Gauci, costume designer Michael Gianfrancesco, lighting designer Michelle Ramsay, and choreographer Jeannette Lajeunesse Zingg, Pynkoski crafts a visually delightful production. The entrance of Ricciardo on a boat pulled over a sea of waving silk by male dancers in sailor out fits is sheer whimsical fun and one of many such moments.

In the tile roles Juan Diego Florez and Pretty Yende are flawless. Florez, now a good twenty plus years into a spectacular career, is in rare form, no longer a tenore di grazia but a bel canto heroic roles specialist, portending future forays into the roles of Arnold in Guilhaume Tell and Raoul in Les Huguenots.

Pretty Yende (begging forgiveness for the overused pun) is pretty as a picture, poised as a prima donna, dramatically believable, and superb vocally, with an instrument ideally suited to the big-voiced Rossini roles like this one, Armida and Semiramide.

Rossini is the hero at the center of this wonderful discovery, creating memorable music for some unusual combinations of voices, as in the “confusa, smarita” finale that combines three tenors, two sopranos and a mezzo in a formidable finish to Act One. Topping that, the testosterone filled dueling duet for Ricciardo and Agorante at the top of Act Two will set any opera stage on fire, if sung as brilliantly as it is here by Florez and Romanovsky.

The national symphony orchestra of the Italian Radio is led in this recording with assurance and a keen understanding of the Rossini style by the very fine young maestro Giacomo Sagripanti . The chorus of the Ventidio Basso Theatre is tops, the corps de ballet good looking and accomplished, the double DVD well recorded visually and aurally and simply packaged, only wanting more extensive background notes and a translation of the libretto.

But neither nothing nor nobody is exempt from double negatives, except the perfect Rossini and his perfectly spectacular cast.