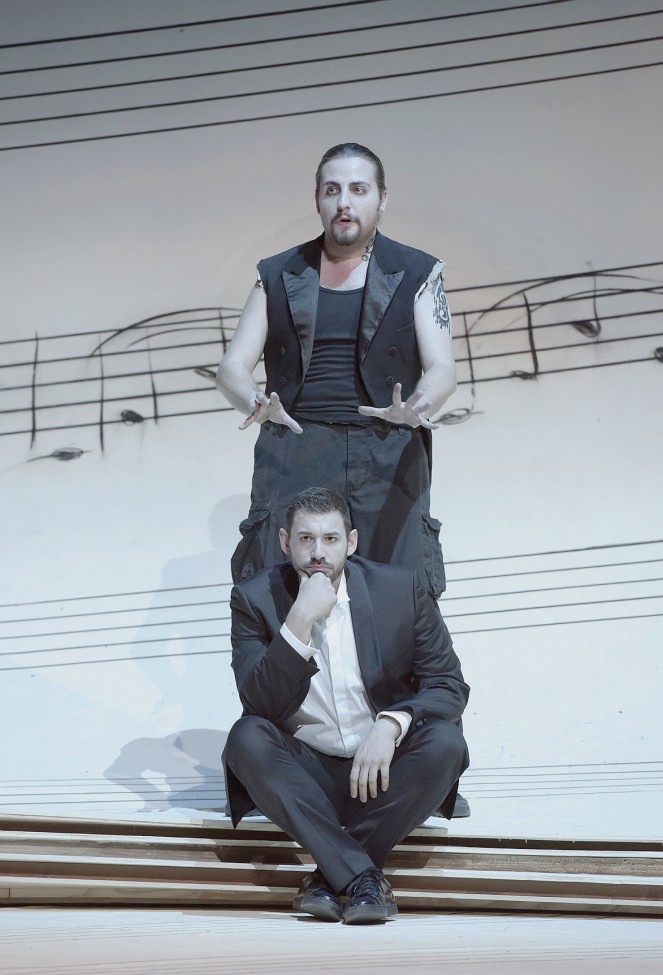 Lebanese-French stage director Pierre Audi ill-conceived Barber of Seville wears out its welcome during the first ten minutes of Rossini’s first act. Clocking in at three hours that feel much longer than 180 minutes this relentlessly unfunny staging now available on a NAXOS DVD relies largely on visual tricks – Figaro makes his entrance on a trapeze, Fiorello and his musicians playing with real bows on imaginary violins, Rosina incarcerated behind the bars of a vertical pentagram while all of the action and inaction takes place on a stack of music paper the size of the Champs-Élysées Opera House.

The set, the costumes, even the make-up are monochromatic – blacks and grays and little else, with neither a hint of Spanish charm nor a glimmer of Seville sun, just a conceptually wrongheaded film noir look and feel to the entire affair.

Once an enfant terrible of the opera stage, Audi at age 63 is now more terrible than enfant, imposing well-worn acting clichés and schticks on his mostly charmless cast, led by baritone Florian Sempey, a well sung but totally humorless, bullying Figaro, badly in need of a shave and a cut himself. Catherine Trottmann is a physically and vocally petite Rosina, pretty as a picture, not so pretty vocally.

The two buffos – Peter Kalman and Robert Gleadow are musically heavy-handed and histrionically clueless, the comprimarios- Fiorello and Berta undernourished.

Only the Almaviva, played more as a cad than as Count, and brilliantly sung by tenor Michele Angelini survives the ordeal, getting the biggest piece of the pie with a fabulously agile Cessa di più resistere at the end of the evening. A little too little too late…