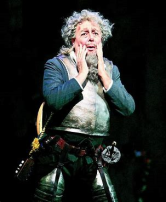 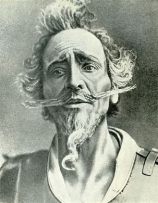 A RECENT POST BY A GOOD FRIEND, an actor whom I once directed in Angels in America and whom I remember as the best Prior Walter in my memory has recently gotten a clean bill of health after fighting cancer.

He was always a young character actor, rather than a leading man type, and I say that because looks never entered into the casting pool as I invited him back to do a number of roles with me as director, no matter how good looking he was anyway.

Don’t let me whiplash you as I now momentarily switch the subject matter from drama to opera, admittedly two distant cousins in the arts spectrum. Regardless how you look, what matters most in Opera is how you sound.

And here comes the connection, as I listen to the Chicago Lyric Opera broadcast of its recent production of Massenet’s Don Quichotte, with the 70-year old Italian bass Ferruccio Furlanetto in the title role that he must have sung gloriously once upon time in his vocal prime.

Sadly, that prime is long past and Furlanetto’s present voice is but a memory of what it once was.

Chaliapin premiered Massenet’s opera at age 37, and a vintage acoustic recording of his death scene floating around out there somewhere amply demonstrates what that voice must have sounded like in the role of the Errand Knight and what its vocal demands are: legato, multiple colors, a facility with the French text…

With Samuel Ramey retired and no Italo Tajo (RIP) or Nicolai Ghiaurov (RIP) around, I frankly don’t know how I would go about casting the title role in a major production.

But one thing is certain, for me at least, and that is that I would pass on Signor Furlanetto’ services and let him rest on his laurels, inviting him to write a book and give some Master Classes to young aspiring Opera hopefuls.

Same thing goes for the now beleaguered Placido Domingo, a once great artist who sadly refuses to hang his hat and now goes round demeaning his illustrious track record doing so-so conducing and so-so singing in baritone roles not suitable to his aging tenor voice.

Ego is a deadly thing.

I mentioned my mentor and friend Italo Tajo above and would like to point out that when I met him and coached with him in the 1960’s his once glorious basso cantante voice had given out, though not his great singing actor chops. James Levine spotted him teaching in Cincinnati and invited him back to the MET to do an array of buffo roles, and thus gave him a second career. So there are alternatives to be considered when the vocal chords misbehave.

And after my circuitous detour, I go back to my actor friend, whom I assume is in his late fifties or early sixties and more than ready to continue playing the great roles for which he once was much too young, since in spoken theater what matters is your acting ability and that, unlike the singing voice, ages well like good wine.