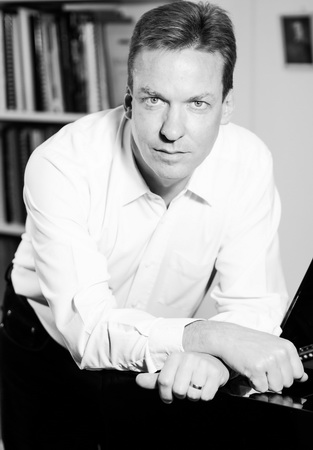 Fourteen years ago bass-baritone Stephan Loges teamed up with pianist Alexander Schmalcz to record a CD of Lieder by Schumann, Franz and Brahms simply titled with the singer’s name. Now and then the indefatigable musical enterprisers at Divine Art Records are putting their promotional derring-do behind this valuable CD all in an effort to obtain a wider listenership in America for these two artists.

Here in our shores the vocal and pianistic art of the Lied has fallen by the wayside outside the hallowed halls of Academia, and, along with its practice, we have witnessed the gradual disappearance of an audience willing to sit through an hour plus worth of Schumann and Brahms and Schubert. Wolf? Strauss Lieder? Both are a stretch for most American concertgoers, sorry to say. So it is with grateful thanks that I receive this musical gift from our friends at Divine Art.

Stephan Loges must have been in his twenties when this album was recorded. Ever since he has been enjoying a nice European career focused primarily on recital and oratorio work, with occasional forays into opera, singing the lyrical area of the bass-baritone Fach, one that encompasses roles as diverse as Papageno, Golaud, Wolfram and the Sprecher (in The Magic Flute).

But in the realm of Lieder singing there is no rigid dividing of voices into categories. You sing Lieder you sing it all. Welcome, then, this capable artist who takes on the chameleonic demands of Schumann’s Dichterliebe, follows them with six songs by the sadly neglected Robert Franz, and follows them with seven songs from Brahms opus 63, opus 86, and a grouping of four from opus 49.

Throughout the hour-long recital, greatly helped by his superbly capable partner, Alexander Schmalcz, Loges delivers a musically rich performance highlighted by flawless diction, impeccable musicianship, elegant vocalism, and pliant idiomatic musicality, with never a moment of the sort of self-indulgent vocal grandstanding of which opera singers moonlighting as recitalists are frequently guilty.

Loge’s pliant and burnished voice is eminently suited to this repertory. He does not show off money notes, He simply delivers high and middle and low as required by the music, with no hesitancy and no ego. That sort of vocal sound coupled to the pianistic brilliance of Schmalcz is all this listener asks for and this CD delivers from start to finish.