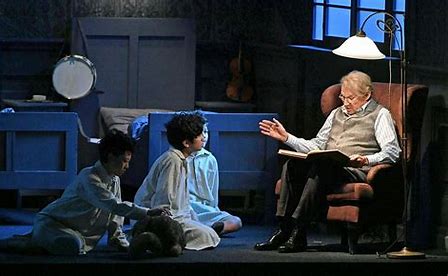 Cmajor/Unitel jointly recorded last August the Salzburg Festival production of Mozart’s The Magic Flute, and Naxos has just released it for the American market.

The results are pleasing, starting with a cast that features both internationally-known singers and up and coming ones. The production is inventive, the playing by the Vienna Philharmonic impeccable, and the conducting by Constantinos Carydis elegant and flexible.

In the Salzburg production director Lydia Steier begins the opera in an early 20th century Austrian household in which marital trouble bubbles up under the seemingly placid surface of a colorless middle-class world. Mother (soprano Albina Shagimuratova) has anger issues that moments later become if not logical at least understandable when she returns as the Queen of the Night.

The family has three well-behaved boys (three enchanting and unnamed young singers from the Vienna Boys Choir) who are for no apparent reason sent to bed early, and who are then used by the director as the Three Spirits that accompany Tamino (tenor Mauro Peter) in the company of Papageno (baritone Adam Plachetka) in a quest to find and liberate Pamina (soprano Christiane Karg), presumably a princess, but here costumed as a circus performer, from captivity by Sarastro (bass Matthias Goerne), who has put the goulish Monostatos (tenor Michael Porter) in charge of her custody.

Let us not forget the very randy and funny Three Ladies (Ilse Eerens, Paula Murrihy, and Genevieve King) and the Speaker (bass Tareq Nazmi) costumed here as a Groucho Marx type, cigar and all. If you are beginning to wonder what happened to the original middle-class home of the opening scene, you are not alone.

In a brash mixing of metaphors, the director transports us into a mad, mad world of acrobats, animal tamers, clowns, freaks, and jugglers that keep things hyperactively happening visually but make not much sense as an accompaniment to the words being sung or the story being told

The employing of the respected Austrian stage actor Klaus Maria Breandauer as a warm and fuzzy Grandpa-narrator saves the production from collapsing under the weight of all the slapsticks, helium-filled balloons, midgets, fright wigs, trained bears and men on stilts, but just barely.

The music-making is much clearer and much better thought out by conductor Constantinos Carydis as a neo-Romantic opera in which ritardandi, freely-sung cadences, and quicksilver changes of tempi are all allowed to be flexibly executed and in so doing nicely fit into the musical fabric of the entire opera, remaining elegantly Classical and perfectly idiomatic.

The singing is all good, some better than good, none embarrassing, starting with the central couple of tenor Mauro Peter, an excellent Tamino, and soprano Christiane Karg, a lovely Pamina.

Baritone Adam Plachetka portrays a loveable and well-sung Papageno, the Bird Catcher, in spite of a blood-soaked apron that turns him into Papageno, the bird butcher.

Soprano Albina Shagimuratova tosses off the dreaded high F’s in both her arias without breaking a sweat.

On the other hand, bass-baritone Matthias Goerne sounds growly and out of his depth in the depths of Sarastro’s low-lying music.

Mozart’s “German Opera” (his words on paper) is tricky to stage, its tone vacillating between the comic and the serious. And then there are male chauvinist groaners in Schikaneder’s libretto, which no matter what the staging approach might be must be dealt with in the Me-too era. Here’s hoping for a Magic Flute to hold a candle to Ingmar Bergman’s glorious 1975 film adaptation of Mozart’s opera.