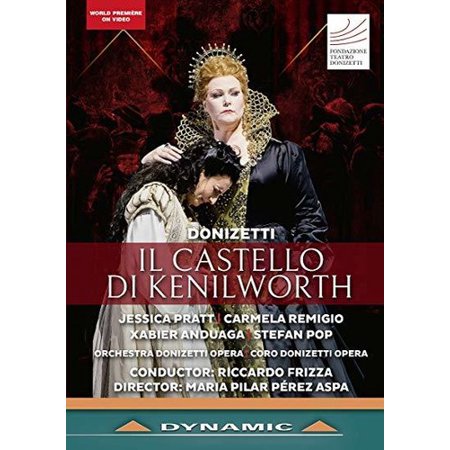 By 1829, the date of the premiere of Il Castello di Kennilworth Donizetti had established his reputation as a composer to be taken seriously. He had some three dozen operas in his dossier and about the same number still to compose before his untimely death at age 51.

Rossini premiered William Tell (his swansong) that same year, leaving the operatic field wide open for the younger Donizetti to become the favorite of audiences throughout Europe, which is precisely what the Bergamo master did, picking up where Rossini had left off.

The Donizetti operas called for a new kind of singer with more protein in the voice, with still some of the agility that the works of Rossini demanded, but with more attention paid to diction and dramatic inflection.

In Il Castello di Kennilworth, a precursor to the Tudor operas, a.k.a The Three Donizetti Queens (Anna Bolena, Maria Stuarda, and Roberto Devereux) we hear flashes of the greatness to come, so much so that it is inexplicable that this early work should get so little attention.

The Donizetti Festival in Bergamo recorded Il Castello di Kennilworth last December, and Dynamic Opera Classic has released it for American distribution. The cast features a good mix of younger up and coming singers side by side with established Italian singers.

Among his estimable colleagues, we found the Spanish lyric tenor Xabier Anduaga vocally and visually impressive in the role of Leicester, the Queen’s favorite. English soprano Jessica Pratt is lovely to look at and equally lovely to listen to as Elisabetta. Baritone Stephan Pop is a properly sinister and sonorous Warmey. Carmela Remigio is an effective Amelia.

Ricardo Frizza conducts with complete mastery of the Bel Canto style. The streamlined Donizetti Festival orchestra and chorus do yeoman work in the excellently filmed video.

Maria Pilar Perez Aspa stages the opera imaginatively on a raked platform set against a cyclorama, with various props and scenic elements that enter and exit providing visual reference points for the various locales.