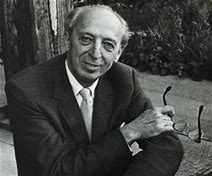 By age 22 Aaron Copland had acquired a solid compositional technique as a student of Nadia Boulanger, just the kind of training which allowed him to write for full symphony orchestra and orchestrate like an old pro.

In 1922 Copland and his friend Harold Clurman went to see the film Nosferatu, an expressionist silent flick directed by the legendary German director Friedrich Murnau. When they returned to their student digs that night, the two young men decided to go to work on a ballet which they cheekily titled Le Necromancien to give their youthful project some kind of avant-garde French flavor.

They were writing on spec, as they say in show business, with no idea as to how they would get their youthful work on stage if ever. But Boulanger encouraged Copland to forge ahead, and he actually completed the work in 1925.

Years went by, and on and off the composer dilly-dallied with his youthful effort by retitling it, then removing it from his catalogue then putting it back.

Grohg? Never heard of it.

Grogh has been recorded and played in concert, but the stage for which it was meant has not surprisingly failed to welcome it. Given the physicality of the title character (a monstrous creature with ghastly features) and his proclivity to play fast and loose with dead bodies, no wonder the neglect.

The music is something else altogether. At times dissonant, with a bit of Stravinsky jaggedness, occasionally jazzy, now and then lyrical, it evidences the still-to-be-formed genius of the composer of Billy the Kid, which happens to be the second work included in this NAXOS CD, with Leonard Slatkin leading the Detroit Symphony Orchestra.

By 1938 Copland had acquired firm footing as a composer to be watched. Back in America he reacquainted himself with Lincoln Kerstein, who in turn introduced Copland to the young choreographer Eugene Loring, commissioning the two young men to write a narrative ballet about the American outlaw William Henry McCarty, aka Billy, the Kid.

Premiered in Chicago and later given in New York and still later toured all over South America, Copland’s ballet put composer, choreographer and a young dancer named Jerome Robbins on the map.

As we all now, Billy, the Kid is pure Americana, and it signals the start of a new Copland, unfettered by any Europeanisms. Whether or not it was this work that caused Stravinsky to say that Copland was not a great American composer but a great composer is beside the point. Here is Copland at his magnificently American best.

Wide open harmonies underpinning lonely soli by muted trumpets and oboes… Melodies that rise up unannounced to linger and disappear and then return in a new guise… Fidgety rhythms that crisscross from the percussion section to the brass in the gun battle scene… Even a touch of the Latin American exoticism which years later he would use in Danzón cubano and in El Salón México is present in the Mexican Dance.

In this NAXOS release, the Detroit Symphony Orchestra, led by Leonard Slatkin gives a magical reading of both works. The strings play as one. The woodwinds and brass do gorgeous work throughout all ten sections of the 33 minute ballet, and the percussion section contributes mightily in as good a performance of this work as this listener has heard, no doubt made whole by the incisive leadership of Leonard Slatkin, one of America’s great maestros.