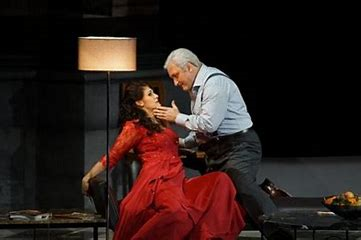 It’s not easy to give a melodramatic potboiler of an opera a credible and relevant contemporary retelling. Goodness knows that quite a few recent attempts at updating 19th century operas have had less than felicitous results.

Choosing to leave unmentioned the culprits I have in mind I will zero in on the new TOSCA production recorded in Salzburg last Easter Festival and now made available by UNITEL and Cmajor.

The news is not good as regards the staging by Michael Sturminger. The German director’s choices for this Tosca are generally illogical and capricious. The contemporary feel of the staging is largely limited to the surface trappings and does not extend as it should to the behavior of the actors embodying Puccini’s characters.

From the shootout that opens the opera even before the famously ominous Scarpia chords are sounded Sturminger fails to underpin the why and wherefore of the back story of Giacosa and Illica’s adaptation of Sardou’s play.

All told this Tosca sadly falls short of perfection by the miscasting of a key role and by an inexplicably weird ending: Scarpia stabs Tosca who lies on the floor seemingly lifeless…Tosca leaves… Just as she exits Scarpia crawls towards his desk in search of something…  Curtain down…Curtain up… New set…Scarpia’s henchmen are training teen age boys in the arts of violence… The boys and their teachers exit momentarily…Cavaradossi is brought in…He sings E lucevan le stelle…Tosca enters dressed in a Casablanca outfit… She and Cavaradossi sing their big duet…The young thugs-in-training reenter, armed with pistols… They shoot Cavaradossi… Scarpia enters, bloodied from Tosca’s knifing but still alive…Tosca draws out a handgun… She shoots Scarpia… Scarpia pulls out a handgun…He shoots Tosca dead… Curtain.

For once not coming off as a cipher, the role of Angelotti, as beautifully sung and acted by basso Andrea Mastroni stands out as an important character in the telling of the story. Matteo Peirone’s Sacristan is a real person, not a comic with a collection of shticks. Scarpia’s henchmen: Mikeldi Atxalandbasso and Rupert Grossinger are real thugs, not cardboard bad guys.

Then there are the principals, and right there is where a directorial concept can meet its Waterloo. First to enter is Cavaradossi. Latvian tenor Aleksandrs Antoņenko, a fine dramatic tenor in other roles is vocally and visually the wrong choice for the romantic tenor role par excellence. His handling of the lyrical, sweeping melodies Puccini allotted the role is blunt and rough-edged, with a ham-fisted approach to the abundant top notes in the score. And he is saddled with an awful costume obviously designed to disguise the tenor’s massive girth.

Too bad, for Anja Harteros deserves much better partnership. Her Tosca is beautiful to look at, elegant and statuesque, ostensibly a woman at the top of her game as female and actress. Her sound can occasionally turn slightly acidulous at the forte level yet she can spin out some beautiful pianissimi, notably in a beautifully sung Vissi d’arte. She is at her most effective in her scenes with Ludovic Tezier’s marvelous Scarpia in which she matches the French baritone punch by punch.

As the Roman Chief of Police, Tezier cuts an elegant figure, impeccably dressed, his white hair groomed to perfection, his manner suavely sinister in his first encounter with Tosca, neither evidencing the paunch under his tailored jacket nor the beast that lurks beneath the skin of his character. His sound is full, Italianate, and easy up and down the range. And, most important for this role, he is a subtle actor who mercifully spares us all the mannerisms and “bits” that have become part and parcel of this role’s baggage.

It will be interesting to see Harteros and Tezier paired off again in another opera with another tenor and another director. Here they are the principal saving graces in yet another ill-conceived directorial ego trip.