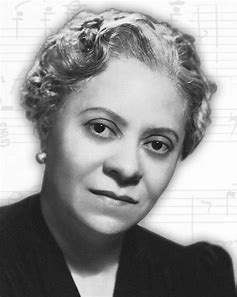 The limitations of space (even on my blog) prevent me from giving free reign to my mix of sadness and anger at the fate suffered by so many musicians of color, especially women, and among the many, Florence Beatrice Price.

Instead of giving the reader a blow by blow account of Price’s difficult life as a woman and artist of color living in the American south during the Jim Crow era, and in the less-obviously but still racist Chicago of the 1940’s I instead direct her or him to a simple search on the Internet.

Having done that, I chanced on a wonderful New Yorker article (February 5, 2018) titled The Rediscovery of Florence Price: How an African-American composer’s works were saved from destruction written by the thinking person’s critic Alex Ross, from whom I quote: “If she were not black and a woman, would she be played? If racism and misogyny had not so profoundly defined European and American culture, would as many white male composers have prospered?”

Then let’s give a loud shout out to John Jeter, music director of the finely-tuned Fort Smith (Arkansas) Symphony Orchestra, who last year recorded Florence Price’s symphonies nos. 1 and 4 with excellent results. Additionally here goes a great big thank you to the ever-pioneering Naxos Records for including this CD in its American Classics series.

Briefly and to the point Florence Price’s life is an example of the fortitude of the human spirit. So is her music: highly original, unpredictable in melody and harmonies, flawlessly and carefully orchestrated, carefully crafted whenever she could get to it while bringing up two daughters as a divorced negro woman in 1940’s America and making ends meet by playing the organ in movie palaces and writing radio jingles.

We should ask our symphony orchestras and chamber music ensembles and soloists to include more of Price’s music in their programs. Here I am not talking just a once-a-year nod on March 8th but as an ongoing effort.

Here’s Alex Ross again: “The idea is not to replace all performances of the “New World” with renditions of Price’s symphonies and concertos. But her pieces warrant more attention than they are receiving now—especially from major orchestras.”

One thought on “FLORENCE PRICE, COMPOSER”