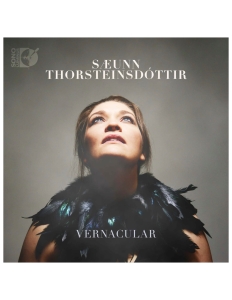 Icelandic-American cellist Sæunn Thorsteinsdóttir has recorded VERNACULAR (DSL-92229) on the Sono Luminus label. The intriguing album, soon to be available from a number of sources, features music for solo cello by Icelandic composers.

Páll Ragnar Pálsson’s quietly meditative Afterquake opens the album. The composer finds his inspiration in the poetry of fellow Icelander Auður Jónsdóttir’s The Big Quake, echoing its description of a barren yet beautiful landscape in a series of musical gestures ranging from glissandi, trills, and double string playing to sul ponticello bowing.

48 Images of the Moon by Þuríður Jónsdóttir engages the attention through the use of a nighttime field recording by Magnus Bergsson made close to the Önundarfjörður fjord. The combination of the nocturnal sounds of nature juxtaposed to Thorsteinsdóttir’s sometimes serene sometimes energetic responses to the enveloping soundscape is mesmerizing.

Halldór Smárason’s O explores in music the poetic connotations of light and darkness. Its three movements: Ljós, Minni and Slokkna evoke a world enveloped in darkness for a good part of the year. In that world, the lighting up of a fire, even one as small and modest as that of a candle takes on a special significance for those who inhabit it. Its three sections blur their starting and stopping points creating a continuum of sounds- some nervous, some serene, some haunting, all of them fascinating

Solitaire brings the album to a close. Hafliði Hallgrímsson’s composition is divided into five sections; Oration is rhapsodic and impassioned, calling for sweeping bowing, Serenade adopts a playful pizzicato approach, Nocturne is meditative and gentle, yet suddenly interrupted by fierce glissandi, Dirge and Jig, elicit a diversity of unpredictable sounds from the cello of Thorsteinsdóttir.

Sæunn Thorsteinsdóttir has lovingly brought to life a project that merits attention from listeners open to new music from all parts of the world, Iceland in this case, from which we hear little and about which we know hardly anything. The cellist has accompanied the beautifully designed and packaged album with candid notes about her musical journey with these compositions, and she has surrounded herself with the Sono Luminus “A team”, headed by the superb Dan Merceruio and Daniel Shores as engineer.