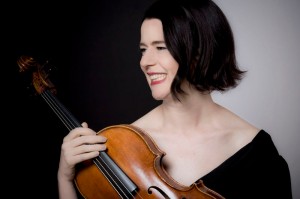 As I looked through violist Melia Watras’ impressive list of credits: solo viola player, chamber musician, educator, and composer, my eye was also drawn to the names of the contemporary composers whose work this artist has played and recorded.

The better known names: Berio…Corigliano…Ligeti…Penderecki… hinted at a preference on the part of this artist for new music that turns its back on post-Romanticism and instead explores the unexplored, either skirting or fully embracing Atonality and or Serialism.

Yet an argument could be made for this artist’s eclecticism: she has also made some recordings of Romantic pieces by Wieniawski and Vieuxtemps, and in the case of the Planet M Records CD Melia Watras Schumann Resonances (PMR – 001) she includes Robert Schumann’s rarely heard Märchenbilder (Pictures from Fairyland), op. 113, combining it with several works, some of her own.

The album is interesting on several levels. First, there is the off-the-beaten path aspect of it: an entire CD dedicated to music for viola and instruments. Although I hasten to add that for savvier collectors this album might not be so out of the ordinary, I must confess that for this listener this is a first.

The album is also a sampler of the use of the much underused viola as a partner with various instruments: piano, trumpet, percussion, violin, human voice, in compositions by Watras herself, and by Richard Karpen and Cuong Vu.

Belying the reputation of the viola as an instrument of limited musical means, Watras puts all doubts at rest by playing with dazzling agility and extracting a luscious, singing tone from her instrument. She plays the quintessentially Romantic Schumann miniatures with heart and utter clarity, and later brings a cerebral understanding of the intricacies of her own compositions and those of her composer colleagues to several of the tracks on the CD.

Here’s a taste of RESONANCES: https://youtu.be/kYA6i-8uZgA