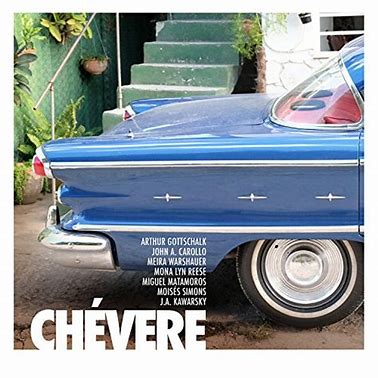 My father (may he rest in peace) never stopped telling me how much he disliked an arrangement of Ernesto Lecuona’s Siboney that the late great René Touzet wrote for my wife and me way back in our singing days. I understood. Old generation Cubans don’t like to mix it up, and my father grew up listening and dancing to the music of Lecuona’s Cuban Boys.

Papi would have probably recoiled in horror upon listening to Arthur Gottschalk’s off-the-wall arrangement of Moisés Simon’s The Peanut Vendor, which opens Chévere, a CD with a mix of Cuban-inflected tunes and contemporary compositions created by Gottschalk, John A. Carollo, Meira Warshauer, Mona Lyn Reese, and J. A. Kawarsky for a terrific group of musicians who came together in January of 2017 to record this album for Ansonica Records.

By the way, I did no recoiling of any sort but sat fascinated listening to some really cool playing that mixed the forthright work of Leyvis Lopez Wilvert on drums and Eduardo Silveira on congas and batá, with crystal-clear French horn playing by Pedro Luis Gonzalez Garcia, Dania Pérez Fonseca, Moisés Hernandez Dumenigo, and Carlos David Guerra Sertano, with both Vilma Sofia Garriga Comas at the keyboard, and Rubén Gonzalez on bass providing solid underpinning.

Much of the music included in this fascinating CD explores the outer edges of a kind of contemporary concert music anchored in a 20th century sensibility redolent of late Stravinsky at its most daring. But then one hears the work of Silveira on congas and batá and one is momentarily and happily thrown off balance. What are they doing? Well, whatever that is… I love it!

Meira Warshauer sets the three Israeli language texts that are part of Akhat Sha’alti to a fairly tonal language which is impeccably handled by the rock-solid female voices of Schola Cantorum Coralina. A couple of tracks later we again hear from her with Oseh Shalom, a poignant plea for peace sensitively sung by the full ensemble of Coralina.

La Habana, Mi Amor!, an interesting setting of three lyrics by Mona Lyn Reese about the kind of love that begins in the kitchen and ends up in the bedroom, is actually a sassy three-part cantata that Kat Parra, an engaging chanteuse with a soprano timbre and a sexy, come-hither vocal delivery sings accompanied by a group of superb jazzmen.

Son de la loma by Miguel Matamoros and again Moisés Simon’s The Peanut Vendor are given a rousing medley by a trio with the typical rural Cuban country mix of Mykel Elizarde’s tres, Yaiel’s lute, and Dayron Ortega’s guitar, with Eduardo Silveira on claves and gourd.

My family, all of them from Oriente, the mountainous Matamoros birthplace would have been pleased. I was, playing the track over several times.

The CD ends with J. A. Kawarsky’s Grace Dances, a lovely, poetic chamber composition generously lyrical in its use of strings and woodwinds that impressively brings the album to a gentle closing.

A panoply of music, some vocal, some choral, some son montuno, some afro-jazz, some traditional, Chévere is a treat that will keep the collector of world music pleased and the lover of Cuban music swaying the hips and moving the feet.