Isabel Leonard has risen to prominence among a new generation of singers who travel comfortably from the Opera stages of America and Europe to the concert platforms of major orchestras. She is also a sensitive recitalist, as demonstrated by the concentrated attention and care she gives, hand in hand with her top-notch collaborative pianist Brian Zeger, to the collection of Spanish songs by Mompou, Falla, Montsalvatge, Lorca, Granados, and Sanjuan, which DELOS released three years ago under the title PRELUDIOS (DE3468).

Ms. Leonard’s voice is that of a lyric mezzo, with a lovely timbre, plenty of flexibility, and the capability of changing colors at will to serve both text and music. And she has the comfort and confidence at both ends of her range to achieve spectacular results, as witness her frequent descents into an earthy chest sound reminiscent of that of Spanish cantejondo singers, and her ringing high note at the end of Granados’ Gracia mia.

But the dusky color of her voice is unarguably that of a mezzo-soprano, and the instrument sounds sizeable enough to hint at things to come in the rising career of this singer. I would not be surprised to learn that she is adding Carmen to her repertory of Rossini, Mozart and Handel heroes and heroines.

Heavens knows that her Latin looks and her dramatic instinct would serve her well in a role originally created by Celestine Galli-Marié, and later recreated by the great Spanish mezzo-soprano Conchita Supervia, neither of whom were dramatic mezzo-sopranos.

Or, here’s a fervent wish: a revival of the long-neglected Mignon of Ambroise Thomas, with Isabel Leonard in the title role.

The CD comes with insightful notes by Susan Youens. Adam Abeshouse perfectly produced and engineered it.

Gilbert Duprez… Adolphe Nourrit… Domenico Donzelli… names associated with the glory days of Bel Canto, when the likes of Rossini, Auber, Meyerbeer, Bellini, and Donizetti were writing operas in which great tenors paraded themselves before enraptured audiences that waited for the next God-given high C, D or E before going back to spying with their lorgnettes on those seated in the adjacent box at the Paris or Rome opera house.

And if we could only communicate up in Elysium with the hapless composers who kept all those tenors gainfully employed and taught them their music and massaged their egos we would hear some terrific tales of hubris and idiocy. But no, we can’t. Nor can we get a remotely accurate idea of what they sounded like, no matter what Stendhal and other critics of the time may say and wax poetic about Duprez et Compagnie.

We can and do listen to some re-mastered acoustic and electric recordings by turn-of-the-century greats and later still legends – Caruso, Gigli – and later throwbacks – Bonci, Schipa – who sort of sounded like the greats of the Bel Canto Age must have sounded when at their best.

But those are just approximations.

So it was with high expectations that we sat down to listen to the young American tenor Stephen Costello’s CD A Te, O Cara (DE3541) recently released by DELOS after having been beautifully recorded at Kaunas Philharmonic Hall in May of 2017, with Constantine Orbelian impeccably and idiomatically leading the Kaunas City Symphony Orchestra.

Stephen Costello does not give away his sound by the pound. He is an intelligent, sensitive, highly musical singer who fastidiously pays attention to the text and the dynamic markings of the music he sings in this recording. His sound is luscious, his technique unimpeachable, his artistry beyond question.

The only aspect of this album I question is the choice of some of its repertory.

This fine tenor’s instrument is not the kind of voice for which Donizetti wrote either his La Fille du Régiment or his Elisir d’amore, or his Don Pasquale. Costello’s sound is clearly that of a lyric spinto tenor barely in his mid-30’s yet well on his way to taking on some of the big Puccini and Verdi roles.

Proof of the pudding: Costello’s Parmi veder le lagrime far exceeds this listener’s expectations. So does his Edgardo in Fra poco a me ricovero. In both the sound is substantial, yet never beefy, but utterly masculine and elegant.

Close your eyes and you’d swear you were hearing the young, pre-vocal debacle Di Stefano. I did.

La favorita, Don Sebastiano, Anna Bolena come from a different vocal universe than the comic Donizetti operas do. So does Bellini’s I puritani. In the excerpts from each of those included in this CD, Costello nails the legato, the top notes, the style, the variety of colors. The singing is unfettered and exciting. And there is never a hint of faking or backing off from vocal cliffhangers.

I look forward to more Costello. Maybe in his next CD he can include some of the heroic Meyerbeer (Les Huguenots… Le Prophète… L’Africaine…) and spice things up with some early Verdi rarities.

For now I am delighted to re-discover the promising young tenor I first heard in a Cincinnati La traviata some five years ago, now blossomed into a major player in the vocal scene.

In 1492 Columbus discovered America, and those Jews who had not been forcefully converted to Christianity or had been tortured to death and burned at the stake in public killings called Autos de Fé, were expulsed from Spain, bereft of their possessions, but firmly holding on to their greater earthly treasures: their culture, their language, their customs, and, most important, their spiritual beliefs.

Off they journeyed, spreading out far and wide all over the Mediterranean, southward into North Africa, eastward to Greece and Turkey, where they settled and eventually integrated into their host communities although not wishing to be assimilated at the expense of a loss of ethnic identity.

An old Spanish saying says it best: “Juntos, pero no revueltos” (together but not scrambled).

What better safeguard from cultural corruption is there than preserving one’s mother language – the Ladino tongue, spoken by the Jews of Spain centuries ago and still spoken, written and read among Sephardic Jews!

The sum total of the songs of the Sephardim is a treasure trove of lyric poetry and a repository of melodic strains the world over, and Countertenor Yaniv d’Or and the one-of-a-kind Ensemble Naya have made it their mission to preserve these gems by performing and recording them in several CD’s.

In Exaltation (Naxos 8.573980), Eyal Leber, Amit Tiefenbrunn, Marvin Dillmann, Erez Mounk, Murat Cakmaz, Nadav Ovadia, and Bari Moscovitz put to wondrous work the classical guitar, the flamenco guitar, the viola da gamba, the didgeridoo, the shofar, the ney, the psalterium, the theorbo, and an assortment of percussion instruments to joyfully take us on a journey of celebration that travels musically to 13th century Christian Spain, to 16th century France and Italy, to Libya, to Turkey, and on to our time.

In lesser hands this assemblage could have amounted to a tuneful grab-bag, but the peerless Ensemble Naya turns it into a memorable artistic experience.

Surprisingly eclectic, the group opts to include Violeta Parra’s Gracias a la vida, and Albeniz’ Asturias – two most welcome choices in a collection of music about displacement in the Jewish, Christian, and Moslem worlds.

When many a singer of his range often adopts a straight, vibrato-less vocal emission in order to achieve accuracy in the very difficult repertory in which countertenors sing, the peerless Yaniv d’Or utilizes a full palette of vocal colors, switching in chameleon-like fashion from the simplicity required by the medieval Cantigas de Santa Maria to the Early Baroque sobriety of Girolamo Frescobaldi’s Se l’aura spira, to the folk-inflected flavor of Manuel de Falla’s Nana.

Quite extraordinarily, d’Or never falters technically, landing always squarely on pitch, rising and falling evenly throughout his range, agile and supple in all passagework, and fully committed to the texts in the multiple languages in which he sings.

Both these CD’s are marvelously engineered, and come with excellent liner notes. My request: next CD, please include translations of the songs. 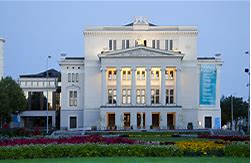 Latvia’s capital, Riga was already a center of musical culture in the 18th century. By the time of the 1918 founding of the National Opera Theatre of the Baltic nation, Richard Wagner, Franz Liszt, Clara Schumann, Anton Rubinstein and Hector Berlioz had left a mark on the musical life of Latvia, involved during their careers as either resident or visiting artists.

Later, during the 20th century, notwithstanding the vicissitudes of wars and occupations, the fiercely proud and deeply cultured Latvians developed a truly authentic brand of national music exemplified by the works of Jēkabs Ozols, Jāzeps Vītols, and Jānis Mediņš, and an abiding love of Opera.

Up until today I must confess to have been totally ignorant about this rich history. What sent me on a quick visit to Wikipedia was the opportunity to listen to and watch a live concert from the Latvian National Opera as it celebrates its 100th Anniversary.

Streamed on OperaVision and available for 6 months at http://www.bit.ly/AnniversaryGalaEN, and on You Tube (https://www.youtube.com/watch?v=yPLnat46a38) the 3-hour plus long event is worth watching during each and every one of its 188 minutes.

Divided into several parts, the first section of the concert is dedicated to excerpts from Latvian operas. It opens with a stirring choral number from Jānis Mediņš ‘ Fire and Ice and follows with arias and duets by Romualds Kalsons, Arvīds Žilinskis, Bruno Skulte, Jāzeps Mediņš, Zigmars Liepiņš, And Jānis Kalniņš. The music is attractive, straddling the post-Romanticism of Strauss and 20th century modernism.

As the concert moved into familiar territory, this listener was afforded the opportunity to listen more critically to arias and duets by Wagner, Verdi, Donizetti, Puccini, and other usual suspects from the standard canon. The choices, as is often the case in this type of concert were not surprising, even though they were very well sung by a diverse number of artists.

Rame Lahaj a tenor from Kosovo opened with Nemorino’s Una furtiva lagrima, impressively sung although with perhaps a tad too much sound for the Latvian jewel box in which the concert is held. He later delivered a perfectly heroic Ah la paterna mano.

Mezzo-soprano, Olesya Petrov raised the temperature with a fine Amour viens aider from Samson et Dalila, later returning to raise both temperature and the roof with Condotta ell’era in ciepi from Verdi’s Il trovatore.

The chorus, the orchestra and the several conductors who helmed the concert give proof that Opera is alive and well in the ancient Baltic nation.