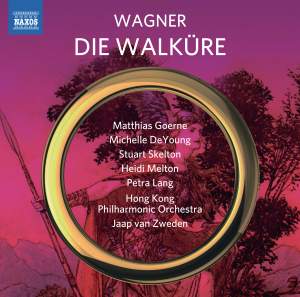 Die Walküre is the second of the four operas that form part of Wagner’s Ring Cycle. It was performed as a stand-alone work in 1870, and it was not until 1876 that it was given as part two of the Ring Cycle, a massive undertaking conceived by its composer-librettist in random order: one text here, its music there…

But we won’t quibble about chronology, and here’s hoping our readers won’t either as we now settle down to share our random thoughts on the Jaap van Zweden Ring Cycle, including Die Walküre.

In the NAXOS release, van Zweden (and I quote from two other reviews of ours) “delivers…a superb reading of Wagner’s score” and “crafts an architectural vision of this epic which he translates into a magnificent musical construct…”

The reasons to buy another “Ring” (if you already own one or more) are simply two: a) the conductor, and b) the singers. I would encourage all Wagner enthusiasts to add this NAXOS RING to their libraries. It is that good.

Bass-baritone Matthias Goerne is a constant presence as Wotan in the Naxos Ring, which pleased this listener no end. In his Farewell he is moving when moved, thundering as to put the fear of the gods in all within earshot.

I try to avoid comparisons among living singers, especially in a role as difficult as this one is. That said, one recalls Goerne’s plangent sound as eerily similar to that of the young Hans Hotter.

Higher praise I cannot give.

Not knowing the why and wherefore of casting vagaries, I can only state the facts: Gun-Brit Barkmin was the sensational Brünhilde in Götterdämmerung. Heidi Melton as Brünhilde sang up a storm in the final scene of Siegfried. Petra Lang as the Brünnhilde in Die Walküre is a true-blue Wagnerian soprano.

Mezzo-soprano Michelle DeYoung makes an impact as the troublesome goddess of marriage Fricka keeping errant husband Wotan in line throughout the cycle, and delivering all along supple and subtle singing. She again does so in Die Walküre.

Once tenor Simon O’Neill opens up in the forging scene at the end of act one of Siegfried you will hear one of the best heroic tenor voices before the public today.

Tenor Stuart Skelton as a stentorian Siegmund, and the versatile Heidi Melton as a lyrical Sieglinde are both excellent in their key roles in Die Walküre

Bass-baritone Falk Struckmann is impressive as Hunding, and Sarah Castle is very fine in the important role of Waltraute.

About the Götterdämmerung singers I sang praises: “The soloists form a wonderful mix of veteran Wagnerians and up-and-coming stars integrated, thanks to Van Zweden into as good an ensemble as ever heard in a Wagner opera by this listener – every leading and supporting role is flawlessly cast.”

I make all these kudos extensive to the casts of this Ring Cycle. I extend a salute to all the artistic and technical personnel involved in this herculean enterprise, and hats off to the folks at NAXOS for making it a reality.