Latvia’s capital, Riga was already a center of musical culture in the 18th century. By the time of the 1918 founding of the National Opera Theatre of the Baltic nation, Richard Wagner, Franz Liszt, Clara Schumann, Anton Rubinstein and Hector Berlioz had left a mark on the musical life of Latvia, involved during their careers as either resident or visiting artists.

Later, during the 20th century, notwithstanding the vicissitudes of wars and occupations, the fiercely proud and deeply cultured Latvians developed a truly authentic brand of national music exemplified by the works of Jēkabs Ozols, Jāzeps Vītols, and Jānis Mediņš, and an abiding love of Opera. 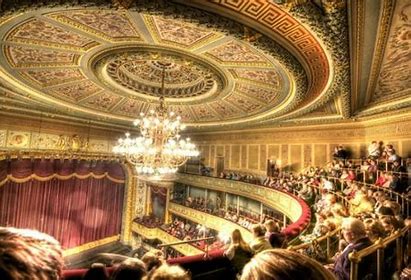 Up until today I must confess to have been totally ignorant about this rich history. What sent me on a quick visit to Wikipedia was the opportunity to listen to and watch a live concert from the Latvian National Opera as it celebrates its 100th Anniversary.

Streamed on OperaVision and available for 6 months at http://www.bit.ly/AnniversaryGalaEN, and on You Tube (https://www.youtube.com/watch?v=yPLnat46a38) the 3-hour plus long event is worth watching during each and every one of its 188 minutes.

Divided into several parts, the first section of the concert is dedicated to excerpts from Latvian operas. It opens with a stirring choral number from Jānis Mediņš ‘ Fire and Ice and follows with arias and duets by Romualds Kalsons, Arvīds Žilinskis, Bruno Skulte, Jāzeps Mediņš, Zigmars Liepiņš, And Jānis Kalniņš. The music is attractive, straddling the post-Romanticism of Strauss and 20th century modernism.

As the concert moved into familiar territory, this listener was afforded the opportunity to listen more critically to arias and duets by Wagner, Verdi, Donizetti, Puccini, and other usual suspects from the standard canon. The choices, as is often the case in this type of concert were not surprising, even though they were very well sung by a diverse number of artists.

Rame Lahaj a tenor from Kosovo opened with Nemorino’s Una furtiva lagrima, impressively sung although with perhaps a tad too much sound for the Latvian jewel box in which the concert is held. He later delivered a perfectly heroic Ah la paterna mano.

Mezzo-soprano, Olesya Petrov raised the temperature with a fine Amour viens aider from Samson et Dalila, later returning to raise both temperature and the roof with Condotta ell’era in ciepi from Verdi’s Il trovatore.

The chorus, the orchestra and the several conductors who helmed the concert give proof that Opera is alive and well in the ancient Baltic nation.