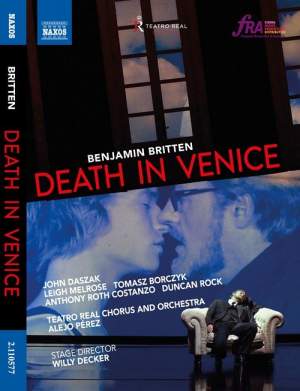 Death in Venice is Britten’s last work for the stage. The composer based it on Thomas Mann’s 1912 short novel of the same title, negotiating with his go-to librettist, Myfanwy Piper to create a distinctly different dramatic landscape from that of the original German language narrative of the same title, until the opera eventually saw its world premiere in 1973.

Given the vast body of works for the stage that Britten created it would be unfair to label Death in Venice Britten’s best opera, although it would be fair to say that it is a significant stage work. Through-composed and largely devoid of set pieces, and neither entirely operatic nor balletic, the work features a group of dancers to portray the family of the Polish boy, Tadzio, a fourteen-year old Adonis that becomes the source of the infatuation that inflames the older writer Aschenbach and that eventually leads him to a tragic end. The themes of the conflict between the lofty Apollonian and the earthly Dionysian impulses, and the obsession of an older man with a younger one recur in this opera, treated perhaps much less obliquely than Britten had in his earlier Turn of the Screw.

The music fluctuates between passages of accompanied recitative and moments of lyricism, especially compelling during the scene changes and the extended dance sequences. The vocal writing, above all that of Aschenbach, a role originally created for Peter Pears, is demanding and replete of melismas. Gone are Britten’s earlier attempts to incorporate 12-tone techniques into his music: instead he stays in a largely melodic, tonal idiom truer to him and his aesthetic.

English tenor, John Daszak does a very fine job in a role long associated with its creator: his singing is potent, and his acting unfussy and ultimately moving. Baritone Leigh Melrose is enormously versatile and vocally impressive in half a dozen roles. Dancer Tomasz Borczyk is a perfect Tadzio, and the quartet of dancers that surround him, portraying the boy’s family is faultless, as is the small ensemble of singing actors that play the appropriately tacky band of players.

Willy Deker staged the handsome production for Madrid’s Teatro Real in 2014 with lovely sets and costumes by Wolfgang Gussmann and Suzana Mendoza. This fine NAXOS DVD was filmed live, with Alejo Perez conducting exemplarily the orchestra and chorus of the theatre.