“Best of” will be popping up at every turn over the next few weeks in every imaginable kind of list. Here is mine, admittedly much earlier than most, with all ten items randomly listed: all ten  equal favorites. This selection includes some well known names and some up and coming artists, represented by recording labels both small and mid-size, whose choices are often infinitely more imaginative than those of much bigger labels.

Listening to the superb reading of Wagner’s Götterdämmerung by the Hong Kong Philharmonic, led by Dutch conductor Jaap van Zweden recently released by NAXOS in a 4-CD set just recorded live, this listener found himself not waiting for the next familiar moment, but wanting to linger at every minute of the 3 ½ hour musical journey. The cast is led by Gun-Brit Barkmin, a sensational Brunhilde.

The Louis Lortie CD of Camille Saint-Saëns’ piano concertos is a musical act of love. Gorgeously engineered and given inspired performances by Lortie and the Edward Gardner-BBC Philharmonic team, the 2018 Chandos release provides a treat to all members of the Saint-Saëns Fan Club.

“Give us a haven upon judgment day” plead the pilgrims on their way to Santiago de Compostela in a 12th chant that opens the stunning Sono Luminus double CD Impermanence. It features the Lorelei Ensemble, a group of nine women under the leadership of Beth Willer singing a wide ranging repertoire unified by the themes of migration and movement.

Hans von Bülow famously called the Piano Sonatas of Beethoven The New Testament. The extraordinarily gifted Canadian pianist Stewart Goodyear, equal to the task of taking on all of these works, has just released a ten-CD collection simply titled Beethoven/Stewart Goodyear – The Complete Piano Sonatas, available from Marquis Recordings and nicely packaged and engineered.

Cuban composer Yalil Guerra’s Guerra Works for String Orchestra’s seven CD tracks more than hint at the deeply romantic undercurrent that runs just beneath the surface of this young composer’s music. Playing with awesome technique and intense musicality, the Ensamble Solistas de la Habana led by its committed conductor Ivan Valiente delivers a performance recorded live with a flawless accumulation of artistic results. The CD is available for download through most digital platforms. 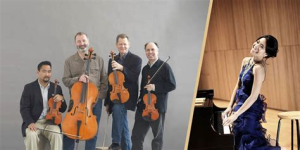 A CD titled Apotheosis vol. 2 features the Alexander String Quartet and pianist Joyce Yang playing Mozart’s piano quartets: K. 478 and K. 493. The five musicians handle this music with an even mix of seriousness and flair, elegance and abandon during every minute of this CD from Foghorn Classics.

A superb 1928 studio recording flawlessly re-mastered and digitally restored by Andrew Rose of Pristine Audio and reissued by divine art (www.divine-art.com) in its HISTORIC SOUND (DDH27809) series is a sonically satisfying labor of love, especially when one considers that this Carmen dates back to the very early days of electric recordings. The singers are beyond reproach, and the great Georges Thill, arguably the finest Don José of his generation, gives a first class performance that provides a lesson about how French opera ought to be sung.

During a period of eleven months in 1981 Leonard Bernstein set aside time from his ever busy schedule to travel to Munich to work on a project near and dear to his heart. It took several rehearsals prior to each of the three public performances – one per act – to make this C Major A05005284 set of three DVD’s of Richard Wagner’s music drama Tristan und Isolde with the Bavarian Radio Symphony, and Peter Hoffman and HIldergarde Behrens at the top of their games as the two ill-starred lovers.

Matei Varga is a deeply serious musician well in the midst of a major career. His playing of works by three of his fellow Rumanians is solid, elegant, substantial, profoundly musical and rigorous. Varga’s hour-long CD, Early Departures (Sono Luminus DSL92223) is available for purchase as either a CD or as a digital download from http://www.sonoluminus.com

In a collection of 8 CD’s and 1 DVD, ever-surprising Naxos has just paid homage to Lenny in its recent release Leonard Bernstein Marin Alsop: The Complete Naxos Recordings. The engineering of the 7 CD’s, some of it going back fifteen years is all top-notch, including several reissues and several brand new recordings. Throughout the seven CD’s, Marin Alsop magisterially commands orchestras with which she has had a long and fruitful relationship.