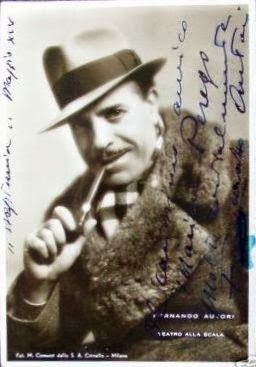 It is not surprising that a hundred years ago Italian opera houses were exclusively producing French and German and Russian Opera in Italian with Italian singers for Italian audiences.

It was not until the world of Opera began to be populated with singers from many nationalities all of whom were expected to sing Gounod and Massenet and Bizet in French, Wagner and Strauss in German, and Tchaikovsky and Mussorgsky in Russian that the tide turned.

But in 1920, the date of the Gramophone Company’s Italian branch recording of Gounod’s Faust, the status quo was to have its contracted singers sing exclusively in Italian.

None of the principals in this recording had a truly international career, I dare say not through any fault of theirs, but rather due to the unpredictability of European politics during the first half of the 20th century. That and the very fickle nature of the business precluded the formidable basso – the Mefistofele in the recording – to move out of the Italian provinces into the big houses of Europe and America.

Similarly Giuliano Romagnoli, the Faust confined his career to second-tier houses in his native Italy. Even the Valentino, baritone Adolfo Pacini sang for nearly forty years yet never rose past the comprimario repertory, notwithstanding a stalwart lyric voice.

The ladies in the recording intermittently rise to the level of the men. The Siebel is cast with Gilda Timitz, a light soprano adequate to the task, but not particularly engaging where a sound resembling that of a post-pubescent young man is preferable in this pants role.

The Margherita (sic), Gemma Bosini is an old school lyric soprano with agility and charm, an easy top, an acidy tone, and a purposeful approach to her assignment.

But it is Autori the one who seems to have a devil of a time with his music. Even though comparisons are often odious one cannot quite forget the elegance of Journet or Plançon as Méphistophélès. Autori instead trades suaveness for stentorian pronouncements – the Invocation to the Night and the Church scene two of many – but never ever at the expense of the music.

Romagnoli is courageous when reaching for the top C in his aria and comfortable elsewhere when lyricism is required. The chorus and orchestra sound sadly ragged, as if singers and players recruited for the recording and given little rehearsal were quickly put together, with Carlo Sabajno at the helm.

In spite of our caveats, this recording (ddh27810) re-mastered in 2008 for the HISTORIC SOUND series of divine art (www.divine-art.com) will make a nice addition to the library of any serious collector of operatic rarities.