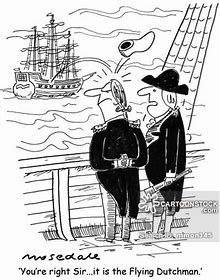 With the 1843 premiere of The Flying Dutchman Wagner vowed to take a new path. Just the same as with the errant mariner who must navigate the seas for all eternity until he finds the true love of a woman, Wagner was embarking on a voyage from which he could never return.

Wagner and Cossima were flat broke and on their way to possible greener pastures in London and Paris, but in neither city were the members of the musical establishment willing to embrace the short and sullen German who, with his Frau in tow, was there to shop his somber metaphysical tale of woe and redemption in one long act.

So, it was back to the drawing board: turn the opera into a three-act one, throw in a couple of rousing choral numbers, add a jolly sailor’s hornpipe, and plug in a little levity to alleviate the pitch-dark plot and then see what happens. What happened, of course, is the stuff of musical history: The Dutchman established Wagner as someone to take notice of and listen to, Tanhäusser and Lohengrin then followed in succession, Wagner and King Ludwig of Bavaria found each other, the mad sovereign built him the Bayreuth theatre, and the Wagner’s were finally financially set for life.

Wagner vowed to take a new path. Just like the errant mariner who must navigate the seas for all eternity until he finds the true love of a woman, Wagner was embarking on a voyage from which he could never return.

At the ship’s wheel in Cincinnati welcome Christof Perick who elicits a fantastic performance from the Cincinnati Opera orchestra, chorus and cast.

In the central title role, Canadian bass-baritone Nathan Berg is a menacing, towering, haunted presence, undertaking a role that has been inhabited by a long list of greats, a list to which his name must now be added. With an inky voice that comfortably surmounts the role’s unreasonable vocal demands, Berg spins out a seamless line in the duet with Senta not long after raising the rafters in his opening Die Frist ist um.

Marcy Stonikas is a statuesque Senta, whom she portrays as a lonely, slightly neurotic girl in her early twenties who has never known anything other than life at home in a village by the sea. Her voice has equal parts of silk and steel, and she holds her own through the three-hour long performance

The other principals are flawlessly cast and deliver deeply committed performances in their various roles. Jay Hunter Morris is an earnest Erik, compelling in his jealous scene with Senta. Basso Arthur Woodley is a lyrical, fatherly and charming Daland, wonderful in his aria Mögst du, mein Kind, den fremden Mann wilkommen heissen. The fast-rising young tenor Frederick Ballentine is a sonorous Steersman. Veteran mezzo Elizabeth Bishop is a fine Mary.

Purists and traditionalists will no doubt find much to complain about in this updated take on Wagner’s 19th century Gothic tale. I, for one, found the physical production more of an obstruction, including the overuse of abstract projected imagery. On the other hand, neophytes brought to sit through their first Wagner ever will be thrilled by the show, which comes with all manner of theatrical bells and whistles, state-of-the-art projections by S. Katy Tucker and moody lighting by Thomas C. Hase.

The Flying Dutchman has sailed into Cincinnati for the first time in nearly twenty years in Tomer Zvulun’s modern dress co-production with The Atlanta Opera and Houston Grand Opera. The not so good news is that the phantom vessel was  docked at Music Hall for only a couple of performances. Anyone who loves world-class opera should at all costs catch the next operatic vessel at anchor here before that next ship sets sail from Cincinnati again. That would be Another Brick on the Wall, which opens July 20th.