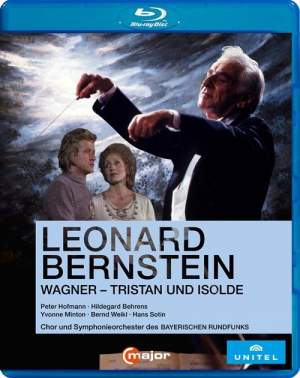 During a period of eleven months in 1981 Leonard Bernstein set aside time from his ever busy schedule to travel to Munich to work on a project near and dear to his heart. It took several rehearsals prior to each of the three public performances – one per act – to make this set (C Major A05005284) of three DVD’s of Richard Wagner’s music drama Tristan und Isolde with the Bavarian Radio Symphony. That happened in the very same city where 106 years earlier the story about the two lovers united in love after death was first given.

In the liner notes to this release Bernstein is quoted saying ”…this is the finest thing I’ve ever done.” I, for one, am inclined to believe him. Standing both physically in Munich’s Herkulessaal and symbolically at the very center of this recording, the 63 year old maestro gives a performance for the ages. It is the good fortune of all lovers of great music that Unitel and CMajor have joined forces to release in June of this year a 38-year old treasure. It comes in an impeccably engineered DVD set that delivers impressive sound and superb images.

With Wagnerian music dramas one must first and foremost single out the orchestra, here the superb Bavarian Symphony Orchestra, Bernstein’s favorite European ensemble. The orchestra, at one with Bernstein’s idea of how the score should be played is on view here engaged, ever attentive, always ready to give its conductor their very best. The strings produce when needed a massive sound that easily is scaled down to subtle dynamics in order for the voices to predominate. Equally effective the orchestra’s brass section is just maybe now and then the finest of any orchestra in Europe. The woodwinds could not be better, with the cor anglais player shining in several instances and most movingly in act III.

The luxury cast of this recording astonishes, starting with the 37 year old Czech tenor Peter Hoffman – vocally and physically ideal for one of the most demanding roles in the Wagnerian canon. In each of the three separate performances, each recorded as a staged concert in front of a live audience, Hoffman conquers the perils of the role. He sings with romantic sweep the love duet in act II and surmounts the rigors of the mad scene and subsequent death scene of act III. Both these are mine fields where many tenors come to grief and others barely survive to tell. Hoffman sails victorious through these turbulent waters.

Each act is long, running in the vicinity of an hour and a half, and each demands extraordinary endurance from its lead soprano. In the role of the Irish princess, the late Hildegarde Behrens reminds one that in her prime she was the legitimate heiress to the Wagnerian Hochdramatische soprano repertory once dominated by the legendary Birgit Nilsson. The extraordinary Behrens husbands her resources at every turn, singing with seamless legato and mezzo-piano dynamics in the tricky middle voice range in which Wagner sets much of Isolde’s music. When she opens up for the big outbursts, such as the Act I curse, she does so without applying the pedal to the metal approach of many other singers of this role.

The rest of the cast is magnificent. Yvonne Minton’s regales the recording with a gorgeously sung and honestly acted Brangaene. The vocally rock-solid Bernd Weikl portrays a nobly acted Kurwenal. The sonorous and imposing Hans Sotin as King Marke is heartbreaking in his remonstration to Tristan in act II. Raimund Grumbach provides a lovely lyric sound for the role of the Steersman. The great character tenor Heinz Zednick makes his mark in the role of the Shepherd in act III. Thomas Moser as a Young Sailor and Heribert Steinbach as Melot perfectly fulfill their short yet important assignments.

The release of this important historical recording is cause to celebrate as we already celebrate the centenary of Leonard Bernstein’s birth.