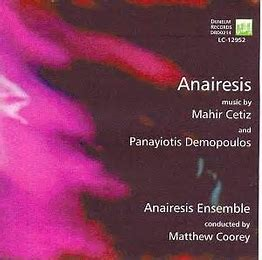 “Heavy road, remote buildings…an approximate definition… I’m on the road…fog pressing upon me from every side…words, whispers, mutterings…a vacant structure…” Thus begins Turkish poet Murathan Mungan’s Bells in the Mist, the inspiration for Mahir Cetiz’s composition of the same title.

Featuring the excellent Anairesis Ensemble, led by British conductor Matthew Cory and generous in its employ of the lighter instruments of the percussion family, Mist Bells’ use of small cymbals, vibraphone, crotales, and tam tams, accompanying a woodwind ensemble in tandem with violin, cello and piano trio, creates a dream-like sonic landscape that envelops the listener much like the fog in Mungan’s poem..

Panayiotis Demopoulos’ Theme and Variations on a Villota by Filippo Azzaiolo, is a intriguing set of variations for woodwind ensemble that uses a 16th century song by a lesser-known Renaissance composer.

Of Seventh Doors, for cello and piano is a musical homage to Béla Bartók that responds to the Hungarian master’s opera Bluebeard’s Castle by assigning the roles of protagonist and antagonist to each of the two instruments in the composition.
~~~
Panayiotis Demopoulos, piano (ddv24166) features in yet another fine release by Divine Art, a very fine pianist, as evidenced by his playing of the Three Intermezzi, Op.117 by Brahms and Mussorgsky’s Pictures at an Exhibition.

The artist excels in all three of these Romantic miniatures: delicate in the E flat Lullaby, elegant in the B flat minor, intense in the C sharp minor.

The seasonal connotations of the Spring, Summer, Autumn and Winter of Panayiotis’ composition Four Farewells for Piano are not of the weather variety, but of a sentimental nature, dedicated to the composer’s two most important mentors and each written at different times of the year. They provide a bracing contrast to the Brahms and Mussorgsky compositions that occupy the remainder of this CD.

One thought on “TWO CD’s: ONE REVIEW”