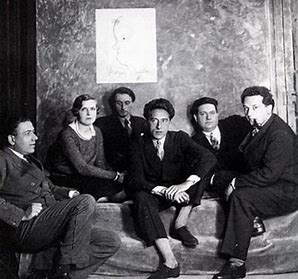 Sam’s mission is, in a few words, to resuscitate the all-but-lost art of art song singing. With that in mind he assembled a gifted trio of CCM vocalists: Simon Barrad, baritone, Erin Keesey, soprano, and Lauren McAllister, mezzo soprano, and collaborative pianists Kseniia Polstiankina Barrad and Ahyoung Jung. They shared as equal partners music-making in which the ones up front were Messieurs Honegger, Poulenc, Auric and Milhaud. Kenneth Griffiths provided insights into the songs and their composers in the narration that preceded each set.

The composers and their poets were present in spirit, and the spirit of their music was feted with Gallic panache by the five artists in the program, each and every one giving their very best to the songs of four members of the loosely knit group that was given the sobriquet of Les Six by Henri Collet, a French music critic.

Monsieur Collet decided to lump Darius Milhaud, Francis Poulenc, Georges Auric, Arthur Honegger, Louis Durey and the single female member of the six-some, Germaine Tailleferre into a convenient musical catch all. True, all six members of Les Six were, each in his or her own way, turning their backs on the late Romanticism of Debussy and the exoticism of Maurice Ravel, all  the while searching for a new sound that elicited clarity, adopted straightforward harmonies, and mined worthy texts.

Arthur Honegger wedded the music of his Three Poems to Paul Claudel’s poetry, while Francis Poulenc, with one foot in the church and the other in the cabarets of 1920’s Paris opted for the sometimes naughty, sometimes bucolic, sometimes dead serious 17th century anonymous texts he put to use in his Chansons Villageoises. Poulenc then moved on to the Surrealism of Apollinaire in Bleuet and beyond that to the powerful Deux poèmes de Louis Aragon, that include C, one of the great French songs of the 20th century, and a mocking setting of Fêtes galantes. Georges Auric set to haunting music the words of Grindel, Supervielle and Aragon for Quatre chants de la France malheureuse (Four Songs of the Unlucky France.)

The three singers, displayed excellent French diction, style and rigorous musicality throughout. Simon Barrad, a lyric baritone with the perfect timbre and suppleness needed for the French canon gave an excellent reading of the Chansons villageoises and an impassioned interpretation of Auric’s Quatre chants de la France malheureuse

Lyric Soprano Erin Keesey floated her voice with ease in Milhaud’s Troubadour Songs and then again used her plangent sound to advantage in both Aragon’s heartrending C and Poulenc’s  Bluet. She then sang the tongue-twisting Fêtes galantes with impeccable diction and wicked humor.

Pianists Kseniia Polstiankina Barrad and Ahyoung Jung shared the pianistic duties demanded by the expansive program, playing with both assertiveness and attentiveness to the needs of both singers and songs.

All in all this was an excellently crafted evening that surprised and delighted with some welcome discoveries.  Les Six will be the first concert this season. Visit the Cincinnati Song Initiative’s website (www.cincinnatisonginitiative.org) for more on what’s up ahead.