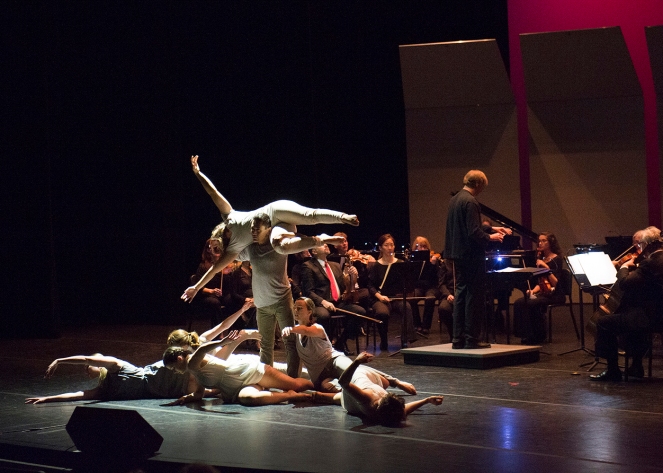 The closing concert of the Cincinnati Chamber Orchestra was a fitting finale to the 2017 SummerMusik, led by newly appointed Maestro, Eckart Preu.  The evening began with the oddly-titled third movement of Phillip Glass’s Symphony no. 3: III. Quarter-note= 112.

The CCO played Glass’s music as MamLuft&Co.Dance performed in a penumbra only illuminated by side lighting, their shadowy movements enhanced on the walls of the theatre.

Choreographers Susan Horner and Elena Moore utilized a rich kinetic vocabulary, creating not merely a storytelling narrative but a visual commentary in counterpoint with the music. Images of bonding, initiation, rejection and acceptance alternated with groupings and solo turns. One must stay alert and watch intently when witnessing a dance piece by this gem of a dance troupe.

Seemingly repetitive and arguably labeled “minimalist”, Phillip Glass’ music for III. Quarter-note= 112 uses a layering of melodic lines that harks back to the early explorations of polyphony in the Renaissance.  The composer positions solo phrases for the first violin that spring out of the dense orchestral fabric only to evanesce moments later.  In this 10 minute movement, the CCO strings created magic, with concertmaster, Mateusz Wolski and principal second violin, Manami White, subtly conversing, while the remainder of the string section supported their musical dialogue, providing the sonic backdrop for the dancers, led by Maestro Preu. 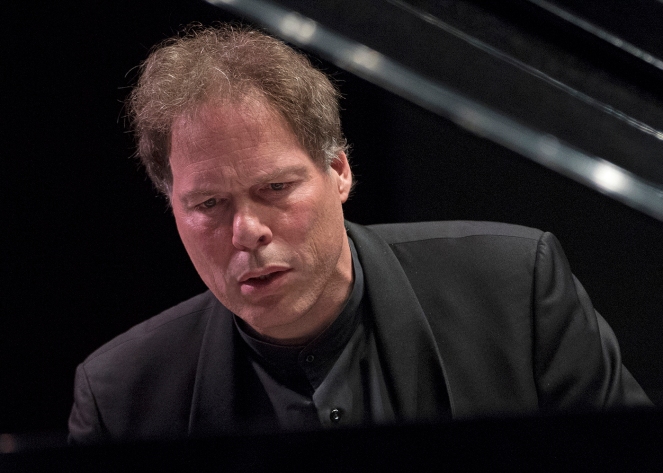 Pianist, Alon Goldstein, made his Cincinnati debut, as soloist in Mozart’s Piano Concerto No. 20 in D Minor.  More than merely playing, Goldstein inhabited the world of a work written in the 18th century that at times sounds like a harbinger of Romanticism.  The Israeli pianist’s insightful commentary,  given prior to the music was validated by a performance that fluctuated from soloist bravura to intimate musical conversation with the orchestra. Maestro Preu engaged in a superbly flexible musical give-and -take with the soloist.

Goldstein graciously responded to the ovation that followed by insisting that Preu share the bows with him. He then obliged with a “let-‘er-rip” performance of Alberto Ginastera‘s Danza Argentina.

The members of MamLuft&Co. Dance returned in the second half of the concert to interpret the Mozart-inspired music of Ukrainian composer Valentin Silvestrov. Goldstein performed the solo piano part, with both he and the string section playing delicately in the background Silvestrov’s loving tribute to the passing of his wife of many years.  Goldstein’s and the orchestra’s playing engaged one’s aural attention from start to finish, while one’s eyes were on the dancing. In a superbly executed sequence of dancer’s moves, the story of two trees that grow side by side and eventually intertwine became a stunning poetic parable about the cycle of life, and a tribute to a loving marriage. 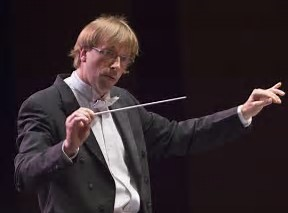 The CCO’s 2017 season came to an end with a joyful reading of Beethoven’s happiest of compositions, his Symphony No. 8 in F Major. After a memorable performance, Preu joined his musicians, responding to the applause of an audience grateful for this year’s SummerMusik season, and for the rebirth of the Cincinnati Chamber Orchestra, one of Cincinnati’s gems.

http://www.RafaelMusicNotes.com All About the Arts