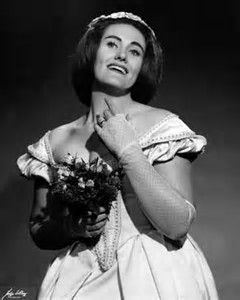 Another addition to any Opera-lover’s DVD library – SUPREME SOPRANOS (VAI DVD 4594) – has been added to the Video Artists International catalogue.

This collection of remastered videos features world-reknown sopranos from the bygone years of great singing in excerpts, arias and duets from the operatic repertoire. Here follows a capsule review of each one of the 17 tracks on the DVD:

Eileen Farrell – Tristan und Isolde – Isolde’s Liebestod – March 4, 1959 telecast.
We will not argue that Ms. Farrell had a right to sing the blues and give up an operatic career to marry a NYC cop and live happily in Staten Island ever after. Oh, but only if… This is an Isolde for the ages, inexplicably a role she never sang from A to Z.

Renata Tebaldi – Madame Butterfly – Un bel di / Death scene – January 6, 1961 telecast.
A so-so actress Signora Tebaldi earns this time an accolade for her commitment to Japanese body-language in both these scenes. As a singer she is ever deserving of praise for her fine, if cautious vocalism. Never our cup of sake as Butterfly, this is nevertheless a fine example of the singing of one of the important Italian sopranos of the 1950’s.

Victoria De Los Angeles – La boheme – Act I scene – February 12, 1960 telecast
Avoiding odious comparisons, this is for our money the loveliest Mimi of them all.  The performance is right on target with the character of the Parisian seamstress vividly expressed in intelligent acting choices and glorious vocalism by our all-time favorite Spanish soprano. She is in fact so believable as the young Mimi that one forgets she was pushing forty when this telecast was given. Brian Sullivan adequately partners her in the scene.

Renata Scotto – Gianni Schicchi – O mio babbino caro – Concert performance: 11/11/91
When Lauretta sings “…andrei sul Pontevecchio, ma per buttarmi in Arno!” she is not being coy but really meaning business: “Either I am allowed to marry Rinuccio or I’ll go jump in the river!” Ms. Scotto trots out this little aria as an encore at the end of a concert, holding a flower in her hand as if she were delivering “When I’ve sung my songs.” Pretty but pretty dull.

Beverly Sills – The Daughter of the Regiment – Marie’s aria – Live performance – 1974
Ms. Sills sounds like a girl of Marie’s age but with the vocal maturity, the style and the exuberant personality of a mature artist in her prime. Her English diction is exemplary, even above the staff. And her singing, as ever, thrilling and nearly perfect.

Roberta Peters – Il Barbiere di Siviglia – Una voce poco fa – September 24, 1962 telecast
Roberta Peters at 20 (her debut), Roberta Peters at 32 (here in her prime), Roberta Peters at 40 (still pretty good), Roberta Peters at 50 (still good and going strong in recitals and musicals) always the same: perfect voice , pretty looks , poised delivery. She was the go-to Rosina of the 1950’s until mezzos began to horn in on the Rossini canon. But those mezzos could never ever pop out those incredible high E’s and F’s. Peters always could.

Montserrat Caballé – Norma – Casta diva – Live concert – January 30, 1971
One more in a long line of great Spanish singers that goes back to Manuel García and María Malibran, Señora Caballé is at the top of her form here, spinning a seamless legato and rising up to the top of her range with utmost ease in this notoriously challenging aria.

Lisa Della Casa – Faust Prison Scene – October 22, 1963 telecast
The excellent Swiss soprano, so respected in the Strauss-Mozart repertoire is a cookie-cutter Marguerite in this scene, with tenor Nicolai Gedda as Faust and bass Cesare Siepi as their nemesis. Not very exciting, the singing is alright, the acting by the numbers. And that goes for all three singers.

Joan Sutherland – Hamlet – Mad Scene/Otello – Willow Song – 3/17/61
In this telecast the Australian soprano made her American television debut. This is a reminder of the force of nature this 35-year old singer was: a late bloomer who re-invented herself hand-in-hand with her conductor-husband Richard Bonynge. Sutherland rose from run-of-the-mill aspiring soprano in search of an identity to the greatest dramatic coloratura of her time. Her acting is uncomplicated, her delivery of the text of both arias sincere, her singing spectacular.

Anna Moffo – La traviata – Ah, fors’ è lui…Sempre libera
She had both her detractors and her fans. She also had challenges: a battle with weight gain, emotional ups and downs…Not allowing for compassion to cloud one’s critical judgment let it be said that this March 16, 1962 shows the young Anna Moffo in top form, self-assured vocally and interpretively, and lovely to watch.

Mirella Freni – Don Carlo – Tu che le vanitá – 1985 concert performance
From the beginning of her career, Ms. Freni had to turn down offers of roles too big for her essentially lyric voice. She was wise to do so, for it assured her of unheard of vocal longevity: she sang Tchaikovsky’s Maid of Orleans at age 60! Here she sings Elisabetta’s eleven minute scena with aplomb, giving when she must, holding back when feasible. It is an intelligently cautious performance, long in beauty and reserved in histrionics.

Rafael de Acha
http://www.RafaelMusicNoteas.com All About the Arts

One thought on “SUPREME SOPRANOS”