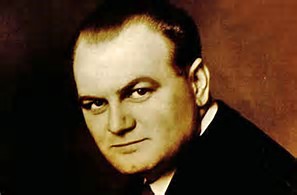 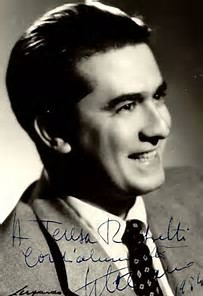 Our evaluation: Invaluable archival treasures cleanly reproduced in High Definition video and well-packaged. The images are uniformly good. The singing is almost all spectacular, save for a badly miscast Lisa Della Casa as an ice cold Tosca opposite Franco Corelli‘s marvelous Cavaradossi.

When looking at video and not merely listening to great singing the bar automatically goes up. Viewing this video we are not only listening, but now looking up close at singers from the ranks of a mid-20th century golden age of singing.

We are watching them in costume earnestly attempting to act believably as young lovers, Spanish soldiers, Egyptian generals and European royalty. But sad to say, in that respect many of the artists represented on this DVD fall short of the mark.

Jussi Bjoerling looks more like a wined and dined Parisian bourgeois than an impoverished poet in the excerpt from La boheme, and both him and the nicely coiffed and healthy-looking Renata Tebaldi make few attempts at making heads or tails of both text and subtext in this iconic boy-meets-girl scene.

Their singing, however, is almost impeccable other than a botched cut-off at the end of the O soave fanciulla off-stage high C that turns a potentially moving ending into “Any note you can hold I can hold longer.” Bjoerling, who also murders the Italian pronunciation appears to be all out for himself musically and dramatically.

There are outstanding exceptions. It should be no news to anyone that Teresa Stratas was one of the great singing actresses of the post-Bing years at the MET. She is a superb Manon, though Giuseppe di Stefano‘s middle-aged Des Grieux is not. And, of all tenors, Richard Tucker is the ideal Canio in every respect.

Jon Vickers, one of the great dramatic tenors and singing actors of the century is a fine Radames in the confrontation scene with the Amneris of  Giulietta Simionato – a one of a kind Verdi mezzo, but never a singing actress.

Franco Corelli, unjustly labeled a “park and bark” tenor is an elegant and sincere Cavaradossi  and an impassioned Riccardo in the duet with Regine Crespin‘s excellent Amelia.

When transitions necessitated by time constraints are brought about with blunt cuts, it is hard to make sense of the proceedings. A glaring example of this is the jump from Ora e per sempre addio to Si, pel ciel in the Otello scene. The singing here is acceptable though neither James McCracken‘s vocalism not Robert Merrill‘s run of the mill Iago appeal.

The trio from Faust features the unjustly underrated Lucine Amara – a lovely Marguerite – opposite the ever-reliable Nicolai Gedda matching MET house bass Jerome Hines decibel for decibel. Even if the acting here is just OK, the special effect that has Marguerite’s spirit leaving her body and ascending up to Heaven is quite effective.

So, to sum things up, no news is good news. No, many of these old timers could not act their way out of an operatic paper bag, but could they sing!

And therein lies one of the ever present concerns that trouble those among us for whom Opera is not a concert in costume but a dramma per musica.

In today’s opera world more and more singers are coming out of conservatories and young artist programs ready for their operatic close-up. They can sing and act and deliver the text meaningfully and well-pronounced in several languages. And many of these young artists have voices to which we must pay attention.

But on this occasion let us walk down Opera Memory Lane in the comfort of home and enjoy, thanks to VAI, these historic performances on DVD.

Rafael de Acha
http://www.RafaelMusicNotes.com All About The Arts

One thought on “TENOR TITANS”