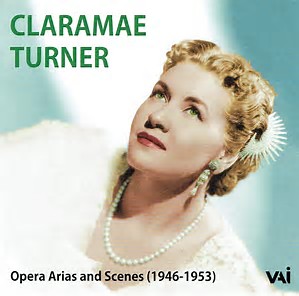 Claramae Turner is what one might call an “all things to all people” singer. Just looking at the list of arias and excerpts in CLARAMAE TURNER Opera Arias and Scenes (1946-1953) (VAI 1283) one is blown away by the scope and variety of styles, languages, and composers represented in this indispensable CD from VIDEO ARTISTS INTERNATIONAL/VAI AUDIO.

The selections come mostly from live radio broadcasts: Standard Hour, Mutual Opera Concert, “Let’s Go to the Opera.” Some have a live audience and the applause that goes with it.

The sound is nicely enhanced from old acetates and tape recordings, rather than from the few commercial recordings Ms. Turner made. And, like with all VAI products, the packaging is neatly accompanied by interesting biographical information.

Now for the singer.

I’d wager that Claramae Turner would have attained the international stardom that eluded her during her career had she been alive and singing today. But stardom is fleeting, and many a voice does not survive the rigors of today’s working schedules. A career like Turner’s evaluated on its own terms would be the envy of many a singer.

She made her solo professional debut in her early twenties and sang healthily and uninterruptedly until her early retirement at the age of 54. She created the role of Nettie in Carousel, and she, not Tony Bennett, introduced I left my heart in San Francisco.

Operatic roles? The MET wasted her talent in roles like Marthe in Faust and Auntie in Peter Grimes. No wonder she said ciao! after four seasons!

In Chicago and in San Francisco she checked off Azucena, Eboli, Herodias, the three hags in Il Trittico, Ulrica, Klytemnestra…

Still on the subject of Ms. Turner’s singing, one is astounded by the stylistic range and intelligent vocalism of this formidable singer, who delivers in this CD an elegant seguidilla from Carmen, a flawlessly sung pair of Dalila’s arias, impeccable legato in Mignon’s Connais tu le pays, a gutsy O don fatale, the dual assignments of La Cieca’s Voce di donna and a let-it-rip Laura-Gioconda duet with Regina Resnik (in her soprano incarnation), a fearless Santuzza-Alfio duet, Erda’s Weiche, Wotan, weiche, and an unequaled Afraid? Am I afraid? from Menotti’s The Medium.

Ms. Turner’s voice straddles the dramatic mezzo and contralto reps and ranges with ease. The voice is supple (she does a nifty run in the Dalila-High Priest duet from Samson and Dalila.) The high notes in O don fatale do not faze her. Neither do the dips into the below the staff region in the Samson and Dalila excerpts, in which the singer displays a hair-raising chest voice.

One should have nothing but gratitude for VAI for having the initiative to produce and issue this album. I, among the grateful, recommend it to anyone seriously interested in the art of singing.

Rafael de Acha
http://www.RafaelMusicNotes.com All about the Arts.