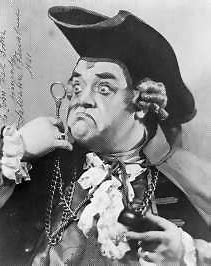 Several are names found in books about the history of Opera, some are operatic generalists who have sung both serious and comic roles. But one thing they all have in common is that early or late in their careers they sang the buffo repertory with a great degree of success.

So what makes a bass singer a buffo bass? Essentially a buffo bass is most often a high bass or bass-baritone whose voice has to encompass a range generally higher than that of his “serious” counterparts. Then there is the matter of physicality. The plus-sized buffo basses of the past, starting with the great Luigi Lablache over two centuries ago and later including Mozart’s Francesco Benucci, creator of the roles of Leporello, Figaro and Guglielmo, were huge men whose girth and lung capacity made them both physically funny and vocally imposing. 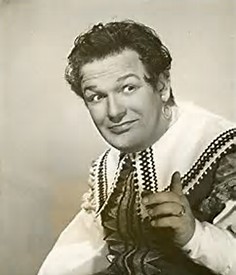 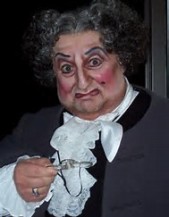 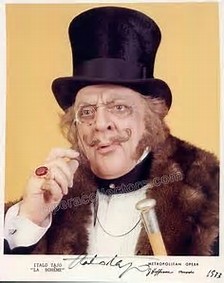 Closer to our time, Fernando Corena and Salvatore Baccaloni were both large men with large voices and even larger personalities. Corena often sang outside the parameters of the buffo repertory but his “money roles” were the great Rossini, Donizetti and Mozart buffoons.

Baccaloni sang at first the standard bass roles, but he quickly chose to specialize in the comic role repertoire. Both these singers brought to their work the kind of vocalism that could not be easily dismissed. Just listen to the You Tube clip of Baccaloni’s rendering of Sparafucile’s encounter with Rigoletto in a 1927 recording opposite baritone Luigi Piazza, and you will have the measure of the man’s artistry. That early on in his career the keen use of what Italians call “la parola scenica” defined Baccaloni as a resourceful singing actor. (https://youtu.be/2CX5p22C1BE – start at 15:33)

The buffo repertory was not defined until the 20th century. Prior to that, the great bases sang everything under the sun. But as the operatic repertoire became larger and more demanding, the need for specializing became a must for young singers entering their careers.

That said, famous basses and baritones the likes of Bryn Terfel, Giuseppe Taddei and Italo Tajo and “house basses” such as Donald Gramm and Ezio Flagello made forays into the buffo repertory partly driven by the desire to take on roles like Dulcamara in Donizetti’s Elisir d’amore or Don Magnifico or Dandini in Rossini’s Cenerentola.

Whether or not these indispensable artists succeeded or failed in these artistic exploration is subject to discussion, but the recorded legacy of true buffo specialists such as Renato Capecchi, Paolo Montarsolo, Sesto Bruscantini, Fernando Corena, Salvatore Baccaloni, Enzo Dara, Alessandro Corbelli and Ambrogio Maestri speaks for itself.

Sadly, the classical records industry first went crazy then belly up after the transitions from 78’s to long playing records to cassettes to 8-tracks to CD’s to VHS to DVD’s exhausted collectors with choices and challenged them with ever-rising price-points. As a result of this chaos and the ever-rising costs of recording classical music in America, artists of the high caliber of Peter Strummer, Thomas Hammons,  and John del Carlo, were not given the opportunity to leave a substantial recorded legacy of their great work in the buffo repertory. In recent times the MET’s HD presentations have become the only existing record of the work of many fine artists.

Ultimately girth and range is not all that defines a great buffo: style, flexibility, diction, and, above all, acting ability are an essential part and parcel of the musical and vocal arsenal of the buffo bass, a kind of singing actor that  comes from a long tradition that extends all the way back to the works of Pergolesi, whose roots, in turn are deep in the Italian soil that nurtured the commedia dell’arte.

3 thoughts on “THE ART OF THE BUFFO BASS”