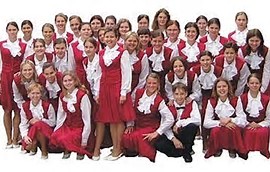 Based on the Bohemian town of Hradec Králové in the Czech Republic, the all girls, thirty-strong, touring choir, delivers under the direction of Jiri Skopal a crystalline sound in Jirasek’s Missa Propria, then transitions to an earthier sound appropriate to the worldly Latin poetry of Si, Vis Amari, Ama, and finally shifts once more to a supple sound suitable to the a capella intricacies of Mondi Paralleli. Throughout, the Jitro singers are stunningly accurate in pitch and malleable in their technical ability. Beyond that, they and their maestro are utterly musical.

The album concludes with the humorous Lavvriksnipxcygrynch (King Lavra), an inventive narrative ballad for choir and percussion featuring pianist Michal Chrobák,  percussionist, Pavel Plašil, and the composer himself on the scissors that finally revealed that the hapless King of the tale had donkey’s ears.

Jirasek’s largely tonal writing evidences influences as disparate as Catholic Church music and Bohemian folk song, both these and others homogenously unified by Jirasek’s own sensibility in this impressive album much worthy of the attention who loves the human voice treated imaginatively by a resourceful composer.