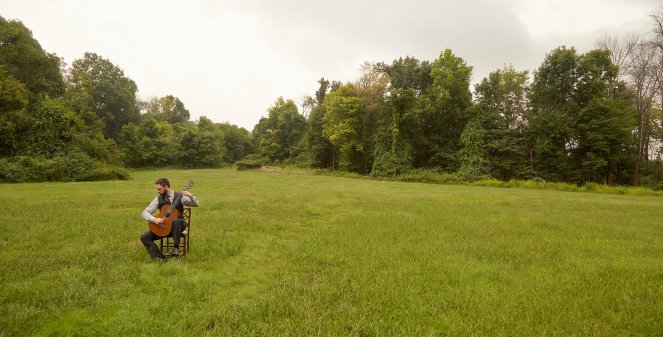 Music criticism or, for that matter, any writing about music is at its best when it happens spontaneously. For me there’s nothing mysterious in writing about music: I simply try to put into words what I hear and what my immediate response is to it. And so is the case with my written response to guitarist James Meade enchanting debut album, Canción, the Spanish word for song.

In the  first five tracks of this  sampler of Romantic Spanish music for the guitar, James Meade lets his guitar literally sing the melancholy melodies of Francisco Tárrega, the Catalan guitar virtuoso who coaxed his instrument out of Madrid’s 19th century cafes and bars and into the forefront of concert instruments.

Tárrega’s music is not all about Spanish fire and passion. His titles indicate a different Spain from that depicted in travel brochures – this is a Spain with deep roots in the Moorish culture that permeated that country’s history for hundreds of years, echoing the Spanish saying, “Africa begins in the Pyrenees.”

Recuerdos de la Alhambra (Memories of the Alhambra), Marieta, Danza Mora, Mazurka and Estudio Brillante (Brilliant Study) are given exquisite readings by James Meade, so intensely concentrated on the emotional content of the music that one is apt to overlook the technical hurdles that this musician is surmounting with unflappable ease.

Manuel de Falla – Andalusian by birth and temperament – distilled all that is quintessentially Spanish into his music, integrating into his compositions a sensibility refined by seven years in Paris during which he assimilated much of what Debussy and Ravel were all about. Thus one can hear in tracks 6 through 9 of Canción, the sound of the mature de Falla in the agile hands of guitarist James Meade: the Song of the Will O’ the Wisp (from the ballet El Amor Brujo – Love, the Magician), the Fisherman’s Story (from the ballet, Pantomima) and a third dance, Dance of the Miller (from the ballet The Three-Cornered Hat).

It was very pleasantly surprising to be introduced via this CD to the music of Agustín Barrios Mangoré. Born in 1885, the Paraguayan composer pioneered the bilingual culture of his native country by infusing much of his music with the sounds of the Guarani folk songs with which he grew up. In the last track in this album, James Meade plays Barrios’ A Dream in the Forest magically, bringing this debut CD to a hypnotic ending.

Throughout the album, the young Cincinnati guitarist James Meade amply demonstrates impeccable musicianship, profound musicality and a complete technical command of his instrument. Those qualities, married to the straightforward engineering and lovely packaging of Canción, augur well for the future of the career of this artist.

The album may be purchased directly from the artist at www.JamesMeadeGuitar.com