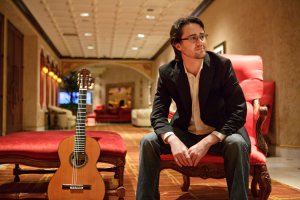 It is both encouraging and challenging to one who reviews music – both live and recorded – to frequently receive sample CD’s by unknown artists for reviewing. When a new one arrives it usually sits on my desktop waiting its turn to be seriously listened to and evaluated.

But this morning it was different. I opened a package containing ASCENSION, a self-produced sampler CD of Russian-born guitarist Yuri Liberzon (www.yuriguitar.com) and casually put it on the CD player, and then even more casually went about my Saturday morning multi-tasking tasks.  And then something happened: the music stopped me on my mundane tracks.

I sat down to really listen, and I was enchanted.

In lesser hands this album could be deemed a musical grab bag of guitar evergreens, but Liberzon gracefully programs John Lennon/Paul McCartney’s Michelle back to back with Ernesto Lecuona’s Danza Lucumi, segues it with a Russian piece of Euro-pop provenance, then surprises us with a couple of Domenico Scarlatti sonatas transcribed by the guitarist himself.

Liberzon next takes on undaunted J.S. Bach’s Partita No. 2 in D Minor, again in his own transcription from the original for solo violin. The last two tracks of the CD take us back to the world of jazz-inflected music with a six-minute-long composition by Keith Jarrett and, as the CD’s closing track, John Lennon/Paul McCartney’s Yesterday.

The entire mix works thanks to the impeccable taste of the artist.

Liberzon, who acknowledges among his musical mentors, Cuban master Manuel Barrueco, is a formidable technician who at no time appears to be out of his element, no matter how impossibly difficult the contrapuntal writing (Lecuona) or the agility demanded by pieces not meant for the guitar (Scarlatti, Bach).

But beyond technical dexterity, Liberzon is a resourcefully stylish artist possessing a strong ability to make his instrument change timbre and colors to better serve the music at hand.

I would recommend to anyone who loves the most intimate of instruments to order this album from its artist/producer, beautifully packaged and engineered as it is.

We now have to look forward to Liberzon’s next CD gem.

One thought on “YURI LIBERSON ASCENSION”