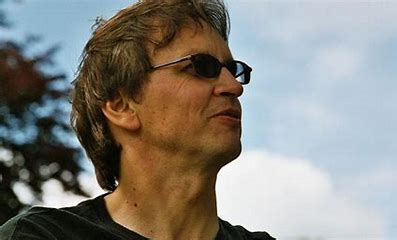 Composer Gernot Wolfgang has produced an eminently enjoyable CD worthy of attention. This highly original composer came to my attention or, better yet, I came to his attention through a mutual friend and this fortuitous circumstance led to him sending this CD for review. In three words the review is “go get it!” which  happens to be the title of one of its tracks.

In his fascinating Passing Through groove-oriented chamber music, vol.3 (Albany Records, 2016) (www.albanyrecords.com ) Gernot Wolfgang (www.gernotwolfgang.com ) keeps company with a terrific group of musicians with whom he grooves in a variety of instrumental combinations. I listened to this album several times over. With each listening I became more and more intrigued. In the well-written liner notes, the composer thankfully explains at length both the music and the stories behind it in a lively and unpretentious way devoid of any musicological gobbledygook. I randomly wrote the following notes before I read the composer’s, and was happy to see that I got what he so beautifully conveyed:

STRING THEORY – Five-part composition…BELA (as in Bartók) – Very fast tempo…Yes, definitely an homage to the Hungarian Béla…CARTWHEELS – Lots of heavy lifting for first violin, while remaining players play long sustained eerie upper range vibrato-less chords …then the same for cello…ppp to mp dynamics…Nuevo Tango rhythms then a return to the same feel of opening…again abrupt ending…NORTHERN LIGHTS – Pizzicato puntillism…often a forward drive from cello…NASHVILLE…Canonic pattern built on a melisma phrase redolent of Debussy that is assigned mostly to the cello…the title, “Nashville” perhaps hints of a hootenanny, dancing feel in the music/again lots of syncopation. New Hollywood String Quartet play beautifully like one musician with four instruments

PASSING THROUGH – BOUNCE…A “hide-and-seek” scherzo for Jennifer Johnson’s superb oboe and Judith Farmer’s bassoon…EVENING SONG…Wistful, quiet, shyly tentative phrases that seem to start a dialogue and vanish…then a duet for both instruments…THE FLEA…Nervous, playful…but more than one flea!

TRILOGY – Piano, oboe and bassoon – GO GET IT…Inventive and idiomatic writing for both the oboe and bassoon, with the terrific pianist Robert Thies as an equal partner…Emotionally charged and changing…then the rhythmic drive that permeates so much of this composer’s work kicks in…and his signature blunt ending…ANOTHER LIFE – Meditative…lovely oboe solo by Jennifer Johnson…then bassoon in a three-way conversation…a slow waltz that fades away…LOOKING EAST – Oriental modal melody played by oboe in its upper range and replies from bassoon and piano…rhythmically complex interspersed with whimsical stops

Wolfgang’s extensive bio and those of his collaborators are included, along with everyone’s photographs. Bassoonist Judith Farmer and the composer himself did the lion’s share of producing and editing this CD with obvious TLC, and Rich Breen recorded, mixed and mastered it with superb sonic results.