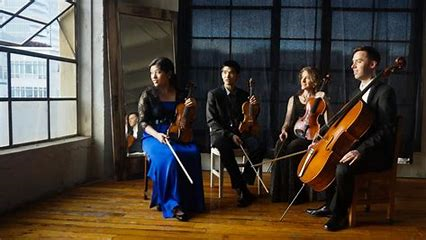 The Momenta Quartet recently gave a recital for Chamber Music Cincinnati which, sadly I was unable to attend. Lucky I was that the group’s gracious leader, violinist Emilie-Anne Gendron took the trouble to send me a copy of their CD, Similar Motion, where the quartet (Michael Hass, cello; Stephanue Griffin, viola; Adda Kridler, violin and Ms. Gendron play Music in Similar Motion by Philip Glass, a 1960 perpetuum mobile composition for string quartet and violin (here Cyrus Beroukhim), Arthur Kampela’s 1998 A Knife All Blade – a made-in-Brazil mini-suite in six muscular movements, and, the piece de resistance of the album: an exquisitely-played String Quartet in G Minor, Op. 10 by Claude Debussy.

The Debussy quartet is an early work (opus 10) – one in which the composer seems more full of questions than answers. It is – as string quartets go – not too lengthy, clocking in at around 27 minutes. Made up of four movements – of which three are animated in tempo – the work is evocative, redolent of the sound of late Romanticism that still then permeated the concert halls of Paris. But Debussy steadfastly avoids the well-worn tricks of the fin de siècle trade, remaining impassively himself: elegant, plucking melodies out of the air that seem to appear out of nowhere only to evanesce as quickly as they came.

The playing is superlative. In the second movement there is an extended pizzicato section shared by the viola and violins so well coordinated that it seems as if we were listening to a newly-created triple-voiced instrument. The Andantino third movement, marked by Debussy “sweetly and expressively” gets just that from the Momenta musicians: a rapturous, melancholy sound that made me run to the CD player and repeat it. The phrasing is luxuriant, with phrases stretched to their limit but never past it. The movement slowly fades away with a pianissimo so soft that it is more like a sigh.

In the final moments of the final movement, after long passages of the kind of harmonic ambiguity that Debussy was already exploring, there is a wonderful sense of suspended finality, as if the composer were saying: “I have barely begun this journey…”